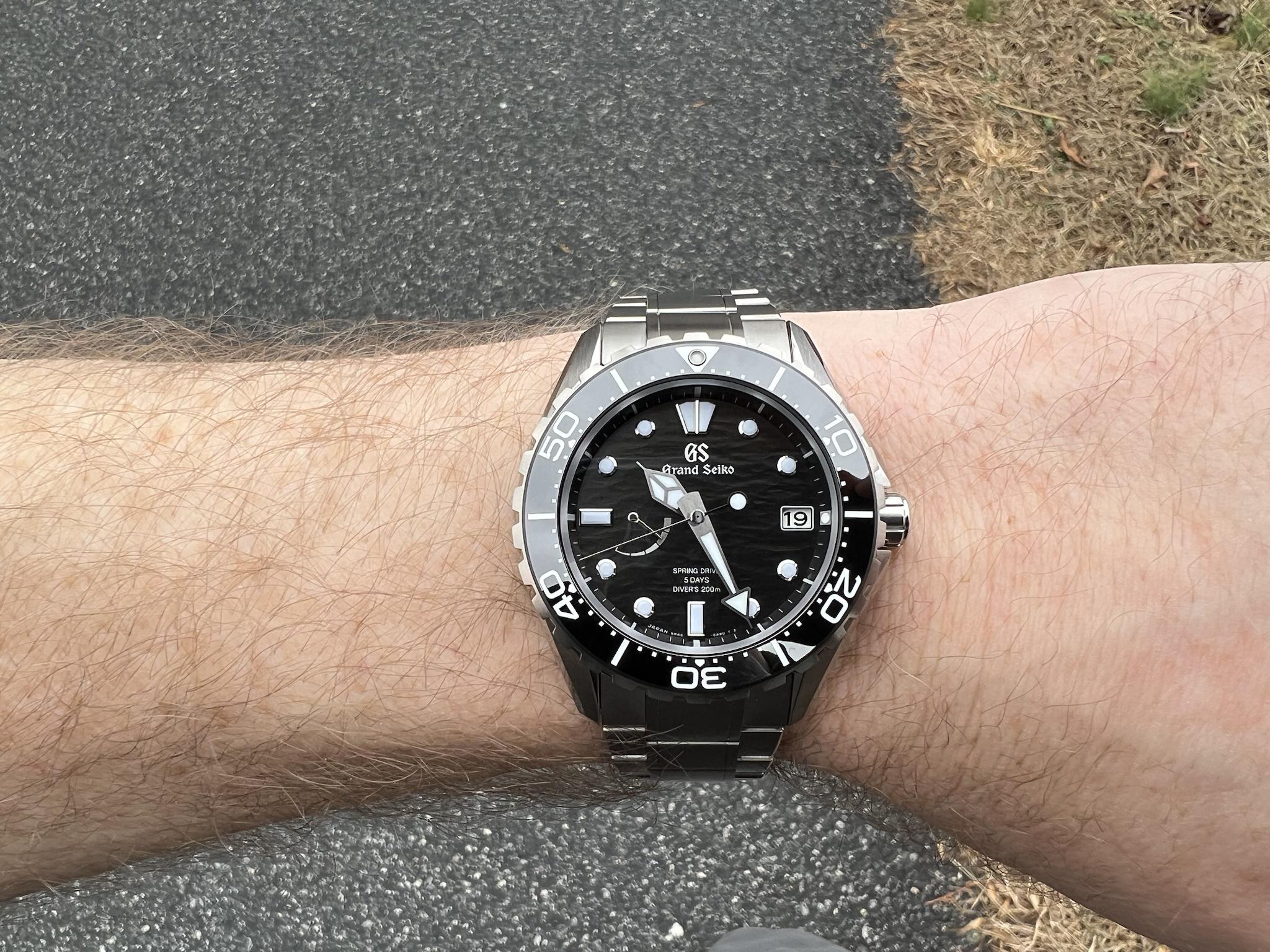 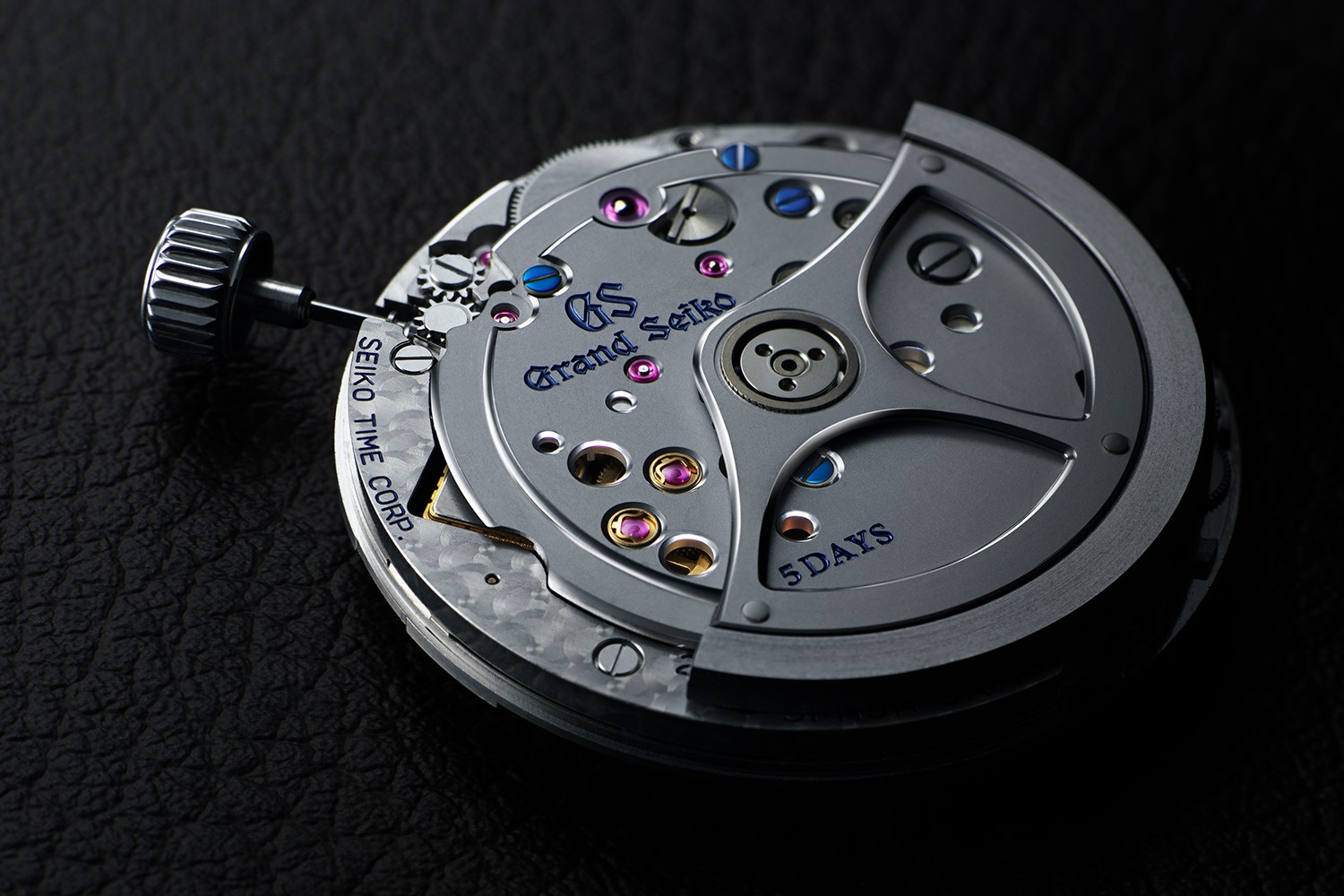 Sure, there are improvements being made to traditional mechanical watch movements every year, with manufacturers adding new interesting complications or using newly devised materials for certain parts to help the longevity or time-keeping accuracy of the movement, but nothing comes close to the Spring Drive when it comes to harnessing a mechanical mainspring and using direct gears to drive the hands of a watch while enabling quartz-level accuracy. Enter: Spring Drive.

So, how is the Spring Drive movement different from a mechanical movement or a quartz movement? It’s kind of a hybrid. From Seiko:

What controls the accuracy of a mechanical watch is the balance spring, a part of the speed-regulating unit, called the balance.
This part influences the accuracy to some extent because it is made of metal which expands and contracts with changes in temperature.

In addition, by making the energy transfer of the train wheel efficient and adopting an IC that drives with low power consumption, power reserve far exceeding normal mechanical watches is realized.
An unprecedented drive system which offers quartz accuracy.
This is the Spring Drive.

Of course we know that some manufacturers are working with different types of materials for the balance such as silicone in order to reduce some of the variability that comes with changes in temperature.

Caliber 9RA5 has an accuracy rate of ±10 seconds per month and utilizes the Offset Magic Lever to reduce the movement’s thickness by 0.8mm. By moving the position of the crown further back, the watch’s center of gravity is lowered and a perfect fit on the wrist results. The Dual-size Barrels are of differing sizes and arranged to allow for expanded capacity while conserving space. This achieves a 120 hour power reserve. The One-piece Center Bridge guarantees the movement’s strength, durability and shock resistance. Together, these innovative technologies define the next-generation Spring Drive movement, Caliber 9RA5.

Besides the increase in power reserve for the automatic winding version, this iteration brings an increased strength and shock resistance, and supposedly some new thermo compensation tech, which I haven’t read about definitively from Seiko, but has been mentioned in some discussions about this movement on the internet.

I don’t think I want to test the shock resistance, so this watch won’t be coming along to the shooting range or be adorning my wrist as I work out. 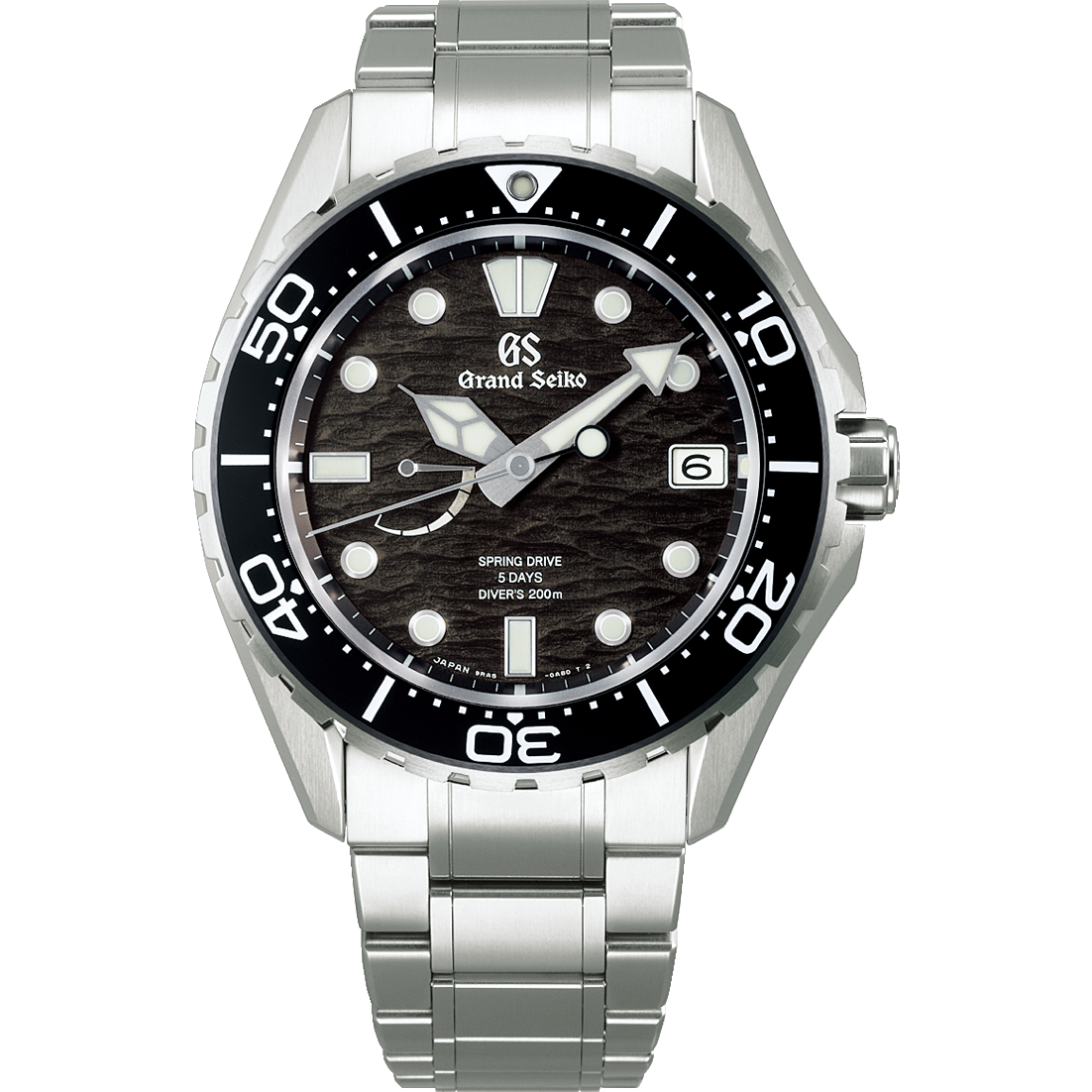 I have been a fan of Grand Seiko for a long time. Having never owned one before (the closest I’ve been was the Seiko Marine Master 300 SBDX001, which is powered by an undecorated Grand Seiko movement, the venerable 8L35) I had pretty high expectations, and I haven’t been disappointed in regards to quality. There’s an overall presence with modern Grand Seikos that conveys a “big league” presence.

Evolution 9 is Seiko’s new Grand Seiko design language. It gets pretty convoluted, with 3 guiding design principles and subsequently 9 design elements based on those 3 principles.

In sticking with these 3 higher level principles, you can see that Seiko has made a lot of small changes that add to pretty significant differences.

An example I noticed when watching a YouTube review of this watch, the presenter compares the E9 to one of the other titanium Spring Drive powered Grand Seiko divers and with the watches placed side by side, you can clearly see some of the new changes. From the font and size of the numbers on the bezel to the overall layout of the dial and hands, to the crown position, it’s apparent that this is definitely an evolution (not a revolution) that helps it to stand out as the next generation of Grand Seiko divers. 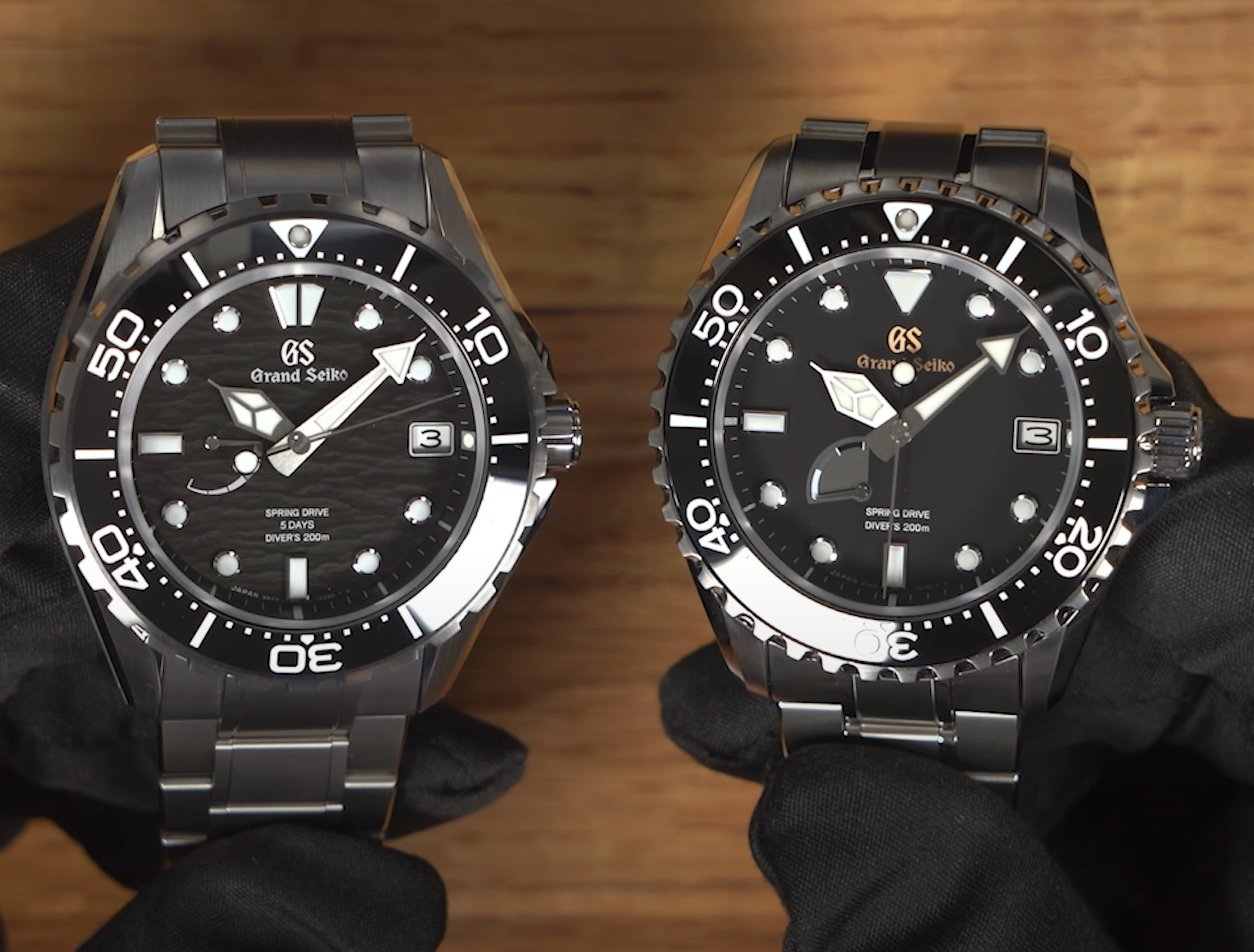 In recent years, there have been several Grand Seikos with exceptionally stunning dials. Examples are the Snowflake, Spring, Whirlpool, Iwate, Kira-zuri, Shadow and White Birch (just to name a few). The dial on the Evolution 9 diver is referred to as the black stream and it is yet another beautiful dial to add to the list.

The black stream, otherwise knows as the Kuroshio Current, is one of the largest ocean streams in the world and flows north of Japan to the Arctic North Pacific. This provides the theme for the Evolution 9 diver. Subtle in its nature, you only get a glimpse of the texture when the light hits the dial just right. In other circumstances, the dial appears to just be black and the texture disappears. 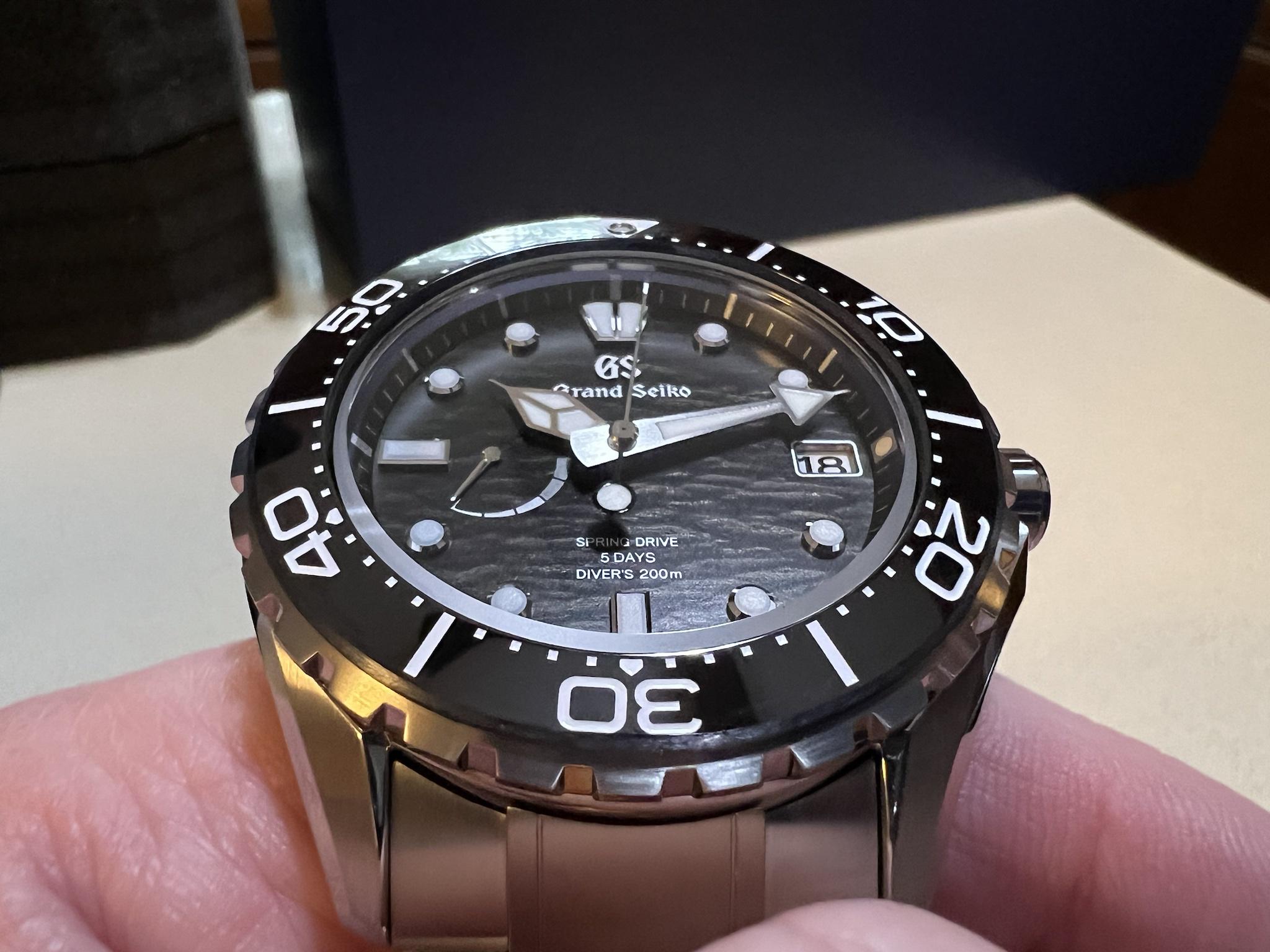 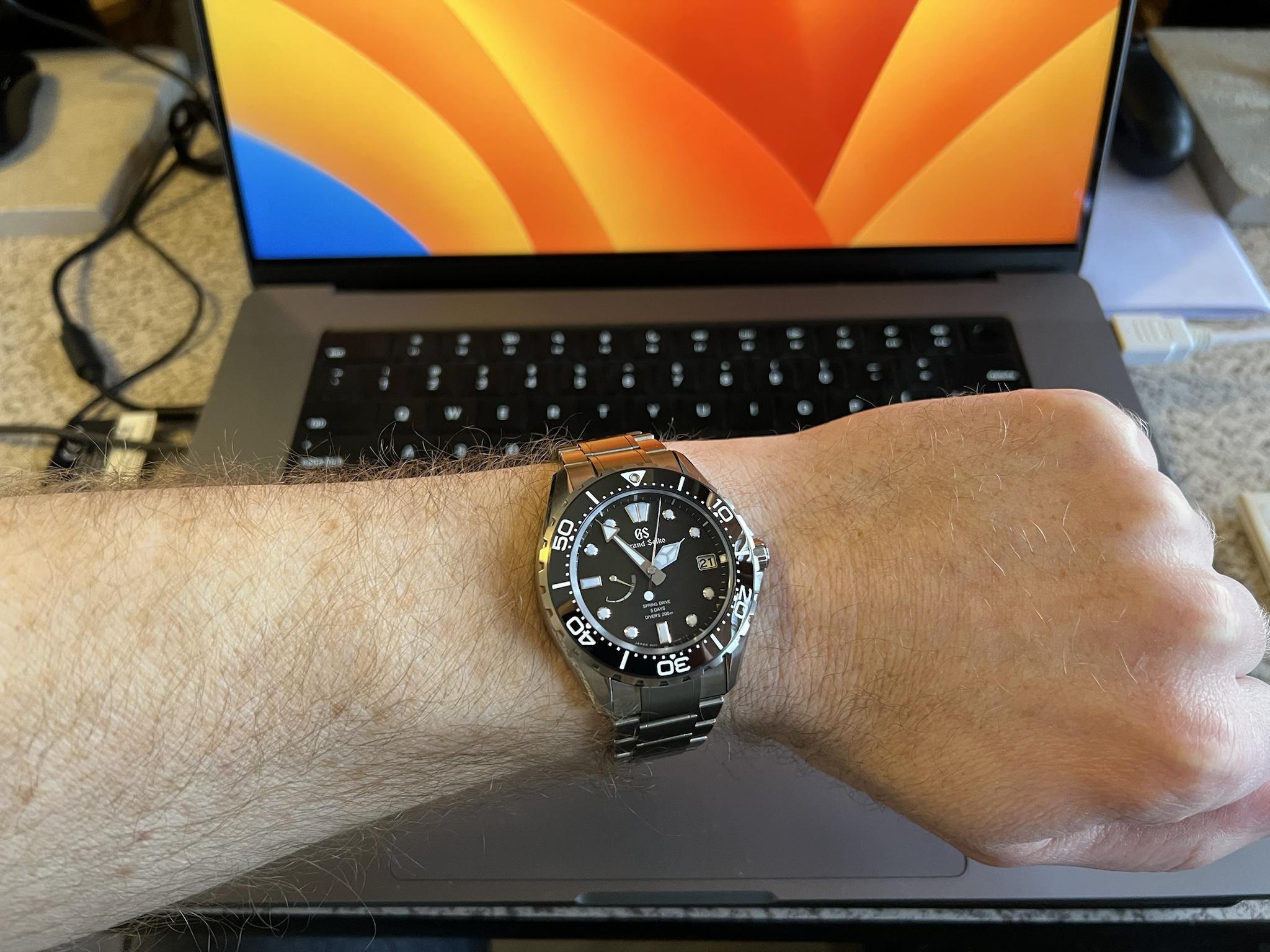 Moving on from the texture of the dial, we see evidence of the Evolution 9 design language as is probably best depicted in the side by side picture above. The orientation of the power reserve on the E9 has been flipped compared to previous generations of GS divers and it indicates 5 days rather than 3 on older models.

The hands are very easy to read at a glance and consist of brushed surfaces with plenty of that long-lasting Seiko lume. The minute and second hands also reach all the way to the minute markers, which I very much appreciate.The second hand has the lume pip on the back side, which is blacked to provide more contrast as it glides around the dial. The longer part of the second hand appears to be polished.

The hour markers are all polished around the edges and give off a nice shimmer when the light hits them. Interestingly, even with the date window placed in the 3:00 position, Seiko added a lume pip to the right on the chapter ring. 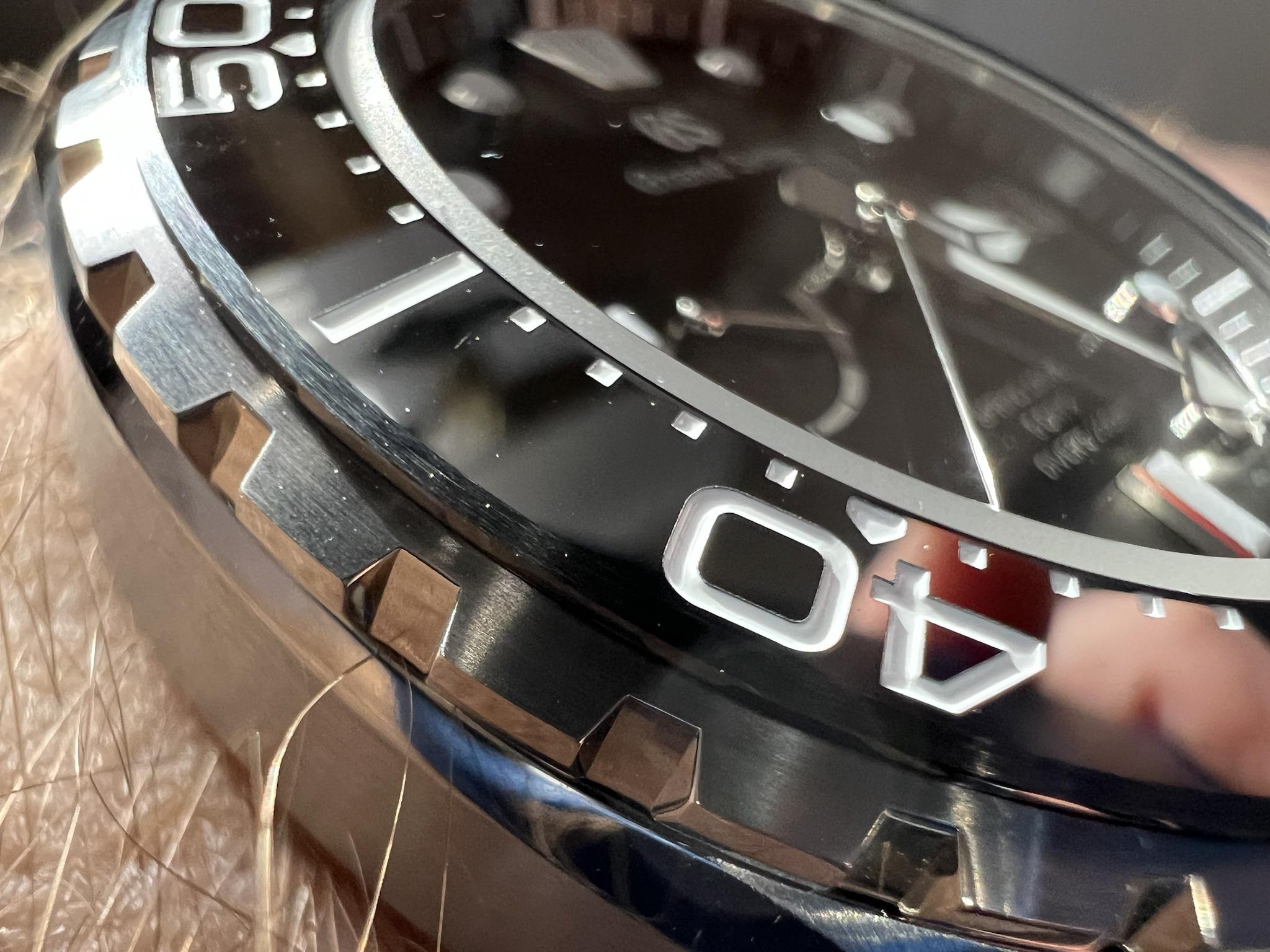 Seiko is now happy enough with their ceramic solution to provide the bezel on the E9 in ceramic. The operation of the unidirectional bezel is nice and smooth, providing a satisfying and accurate 120 clicks.

I haven’t mentioned Zaratsu polishing yet, but it’s Seiko’s hand polishing technique that requires a good amount of skill to execute. This watch is chock full of zaratsu polishing, including the teeth of the bezel. 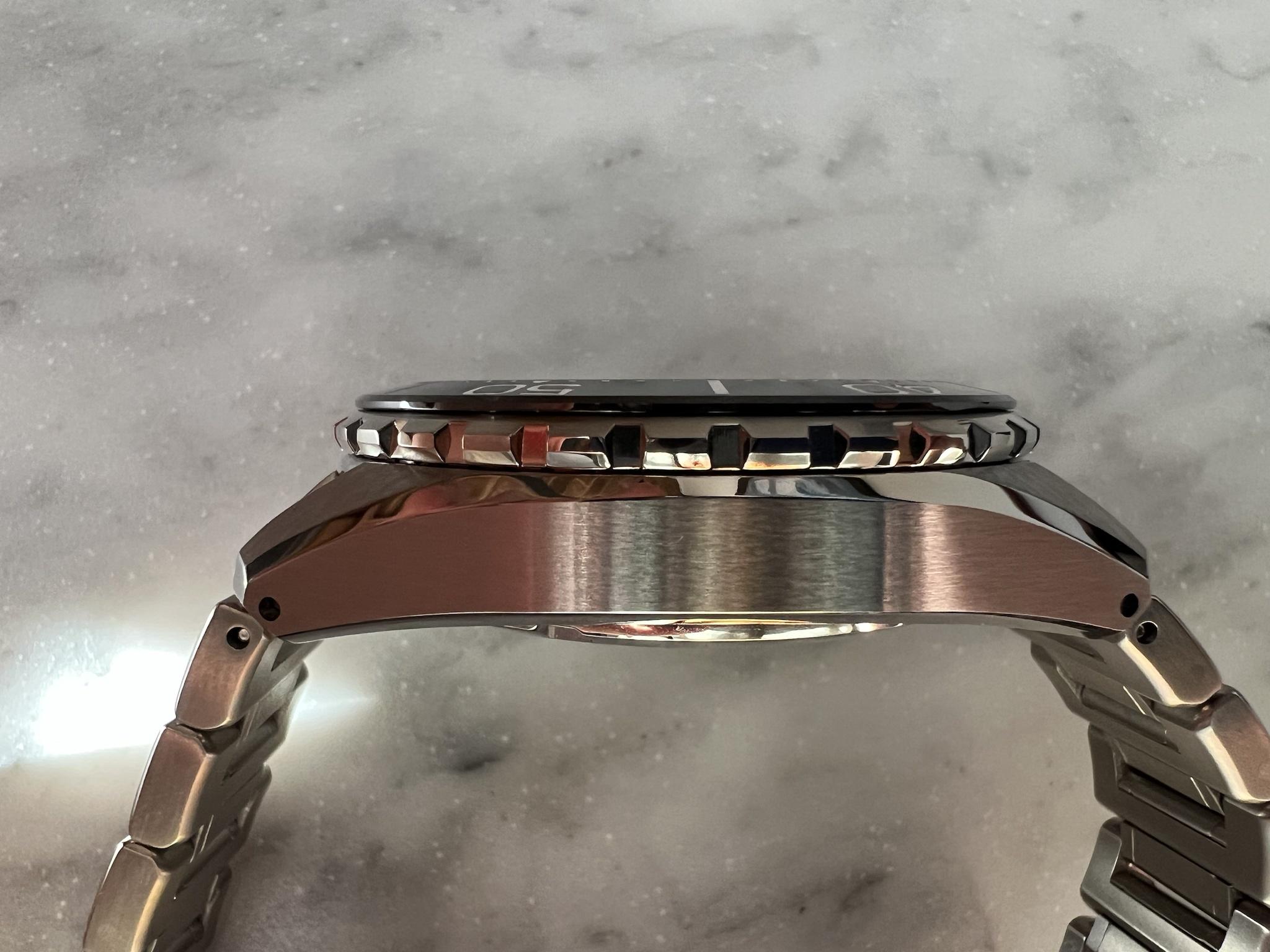 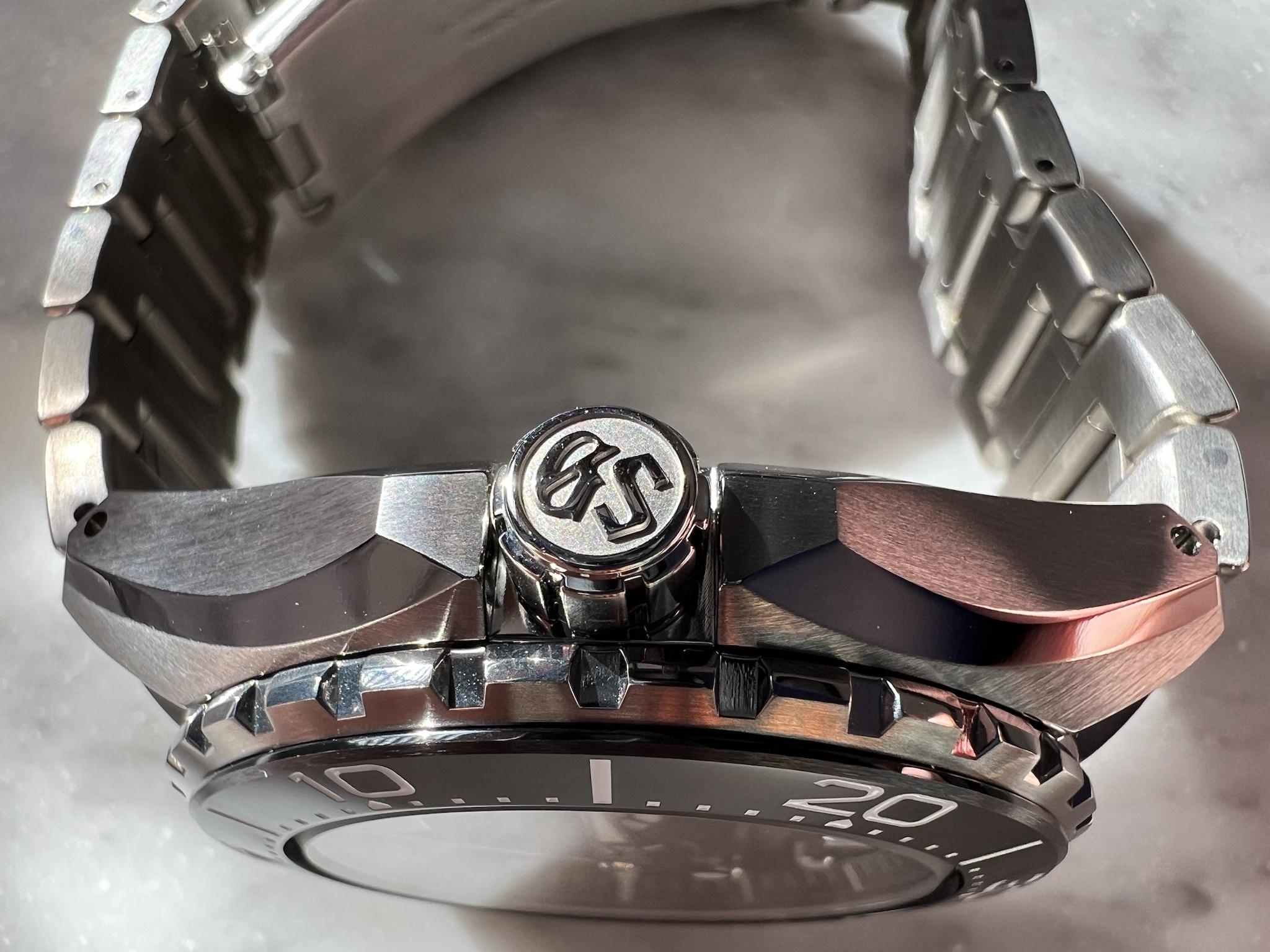 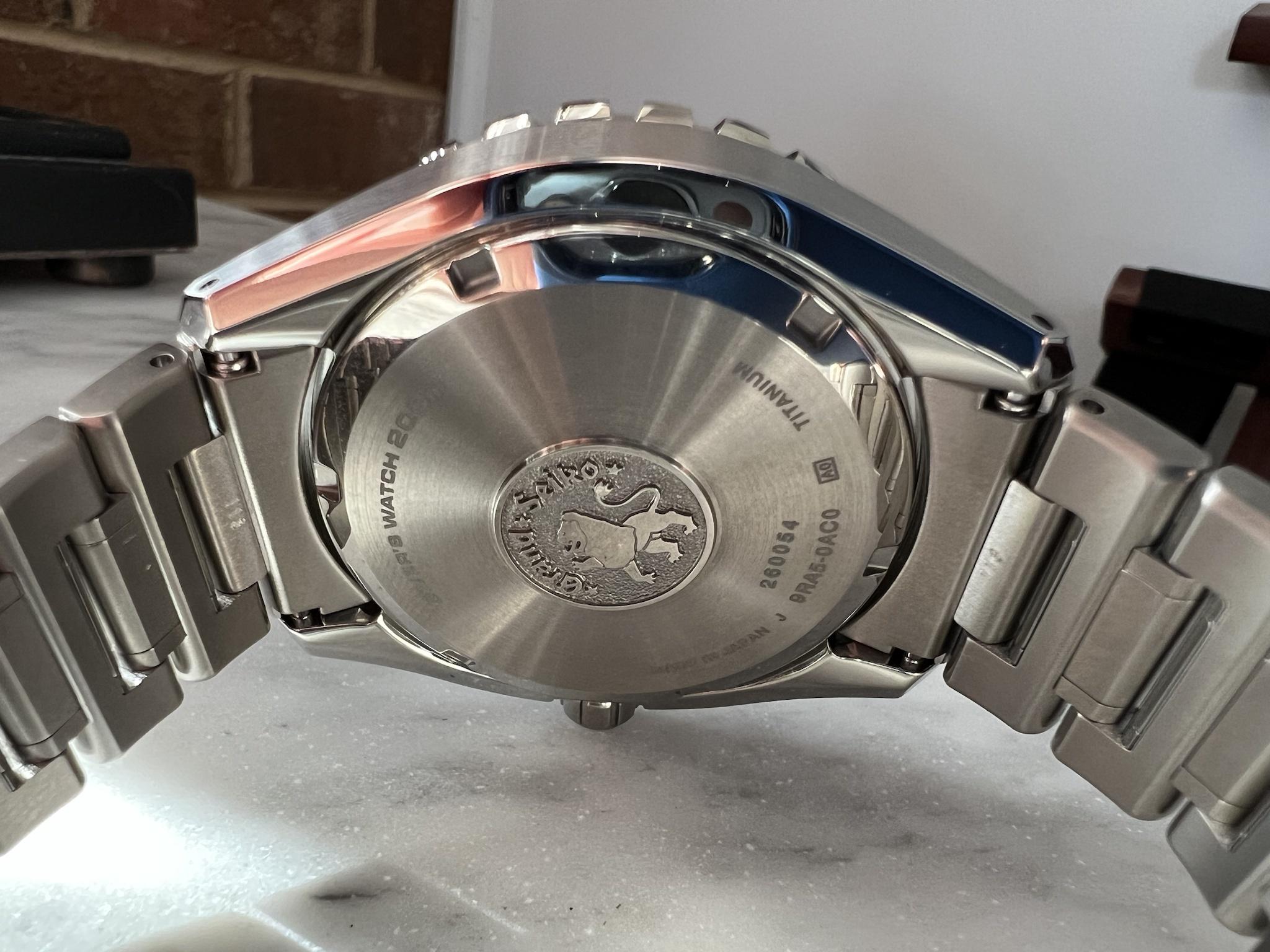 The signed screw down crown is easy to operate and sits pretty snuggly into the case, which is another difference I noticed between it and the other GS diver in the comparison pic up above. The crown on that other one sticks out quite a bit more. I believe that the use of the magic lever in the 9RA5 movement enables this. 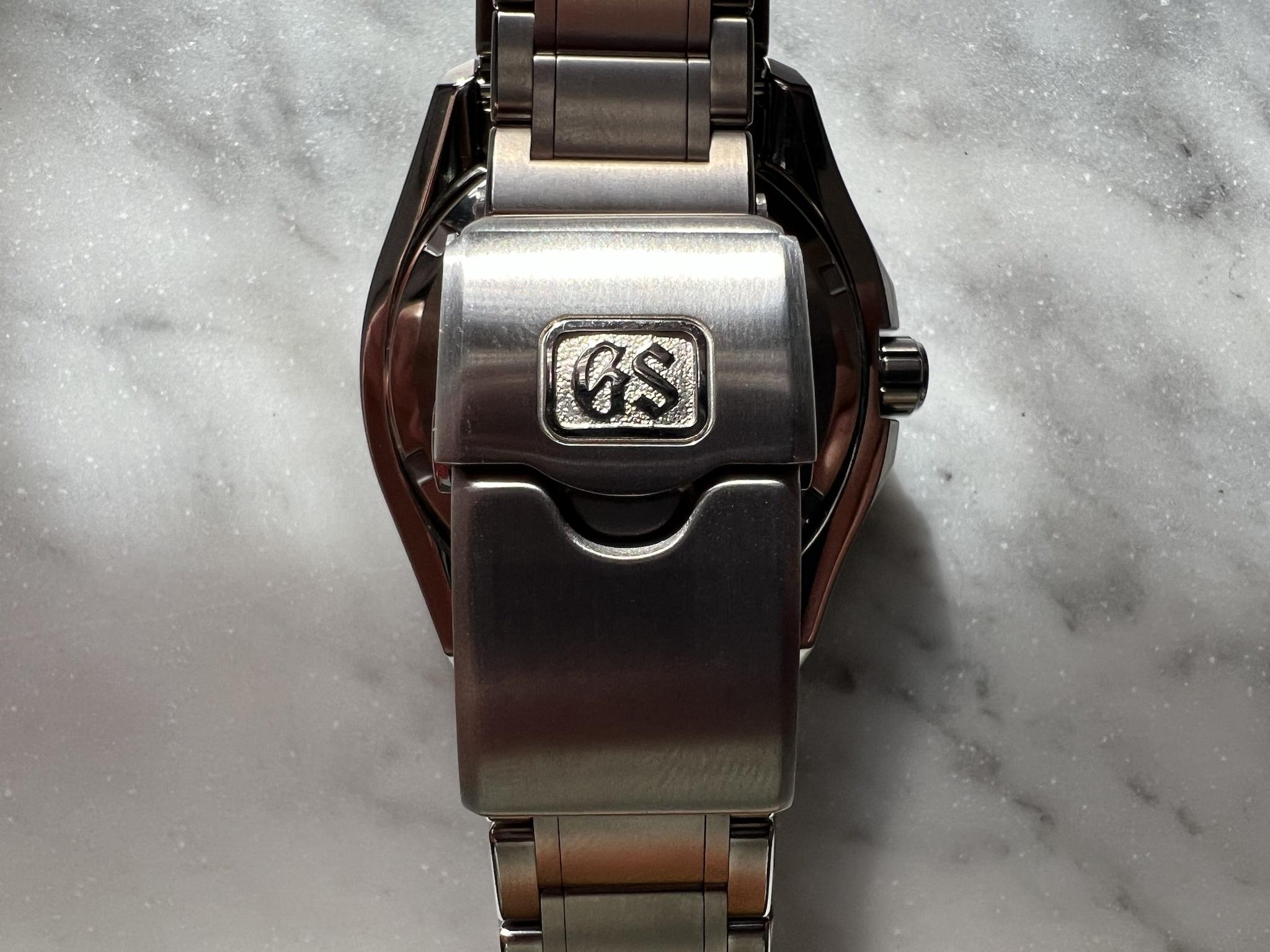 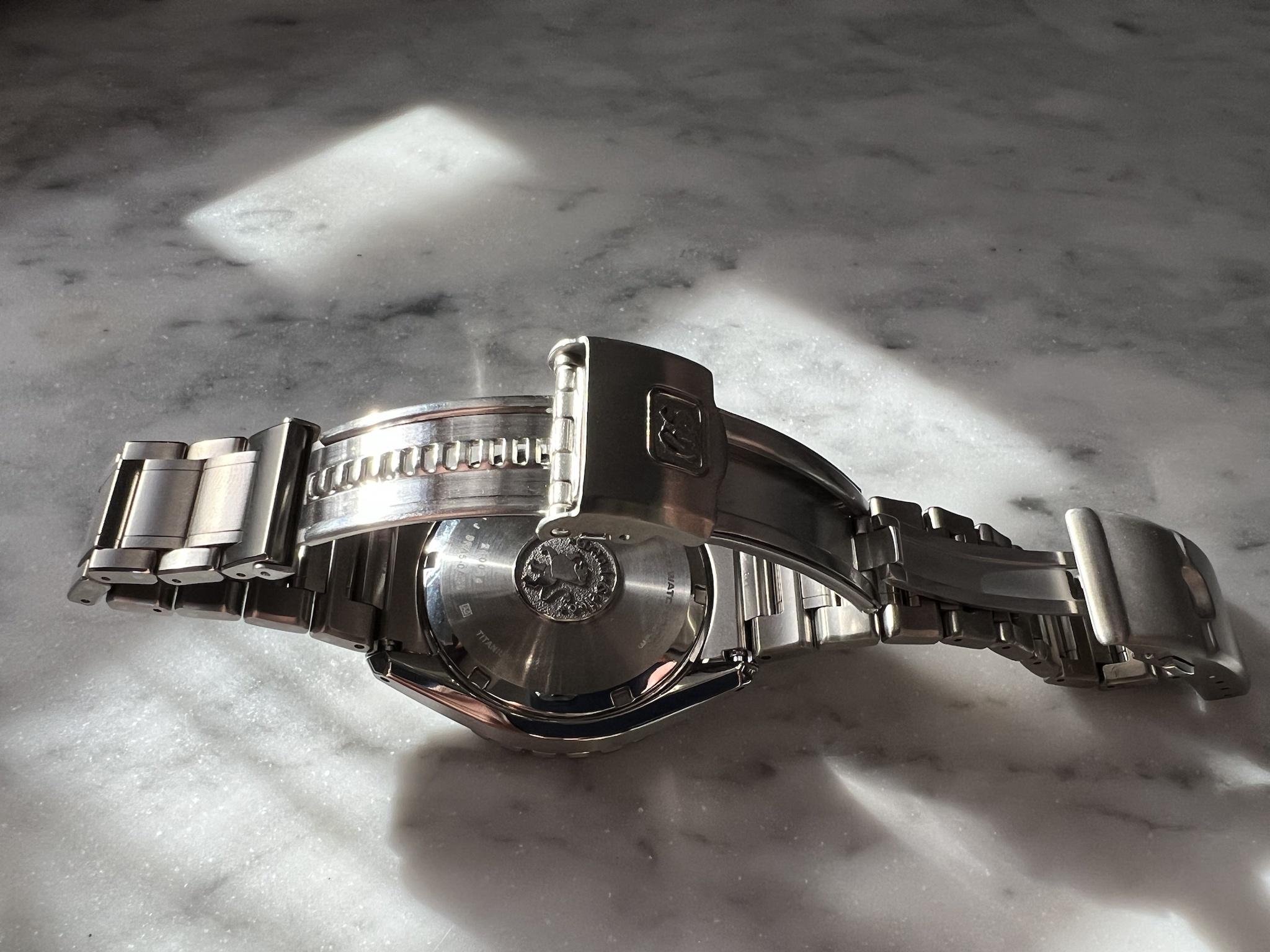 I’m not a bracelet guy, but I’m giving this a shot. It’s nicely done and offers a lot of flexibility with the sliding micro-adjustment. For my ~7.65 inch wrist, I found that keeping it one click from fully engaged is pretty much perfect for me, so there was no need to remove any links to get a good fit. But most people with smaller wrists would need to remove a link or 2. The clasp is signed with a GS stamp. I will be looking for a good alternative strap for this one in the future though.

Overall, I am pretty enthralled with this watch. It’s got a lot of presence on the wrist and one of the big reasons I went after this rather than something with more name recognition *cough* is so that I can enjoy it without letting on to “normal” people just how much it cost. Only a watch enthusiast would have an idea. Very similar reasons why we got a Land Cruiser I guess! Car people know what you have, but Joe shmo on the street just thinks its another Toyota. Anyway, if you have the $11,600 needed to play, I would say go for it, you won’t be disappointed!

Great review of a great watch. My grail for sure.
Top

Mine says hi - just a great watch
You do not have the required permissions to view the files attached to this post.
Top