I have no commercial connection Aquastar

I've had a loving relationship with this watch ever since I first bought one in early 20001.

The watch was unknown at the time but the combination of beautiful Art Deco dial, robust case with a dive ratio engraved on the bezel and the valjoux 23 movement told me that this was a significant design and I watched over time it’s history being unearthed on the internet by collectors. 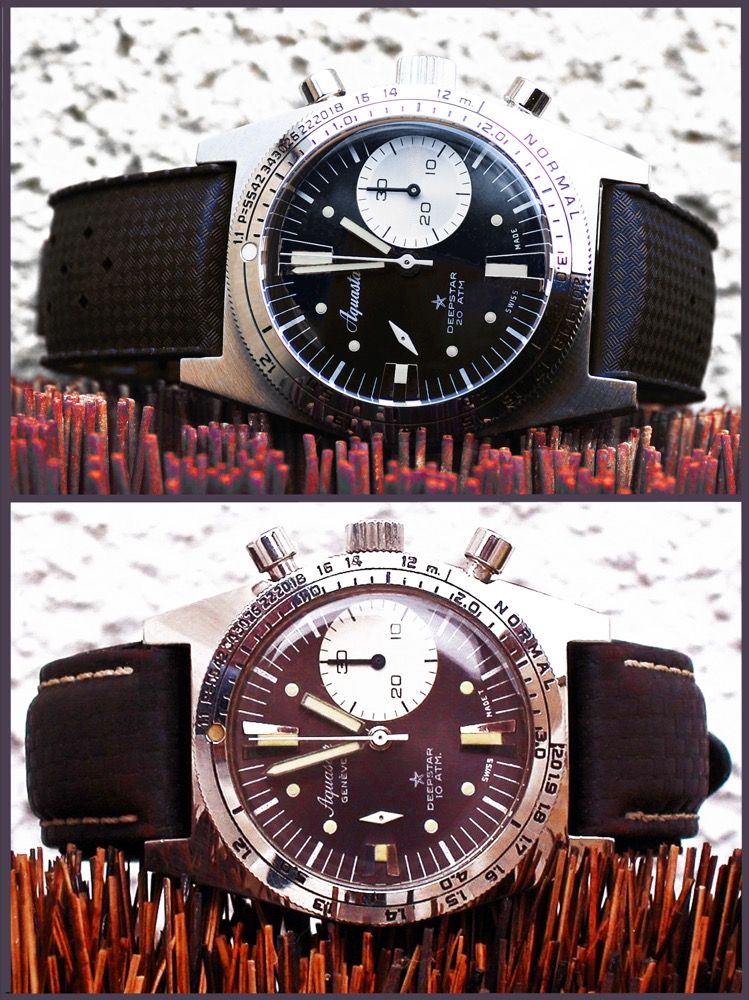 The 2020 on top and the original beneath, both shots taken 20 years apart.

Firstly by random uploaded screen shots of the Jacque Cousteau dive team in the series ‘The undersea world of Jacques Cousteau’ which started circulating on the web did we begin to follow the historical trail. Then only when it was discovered that the watch Don Walsh had worn on his journey to the bottom of the Mariana Trench in the Bathyscape Trieste Submersible was found to be an early Jean Richard Aquastar, did we get to the guts of Aquastar's genuine historical involvement in early under sea adventuring. 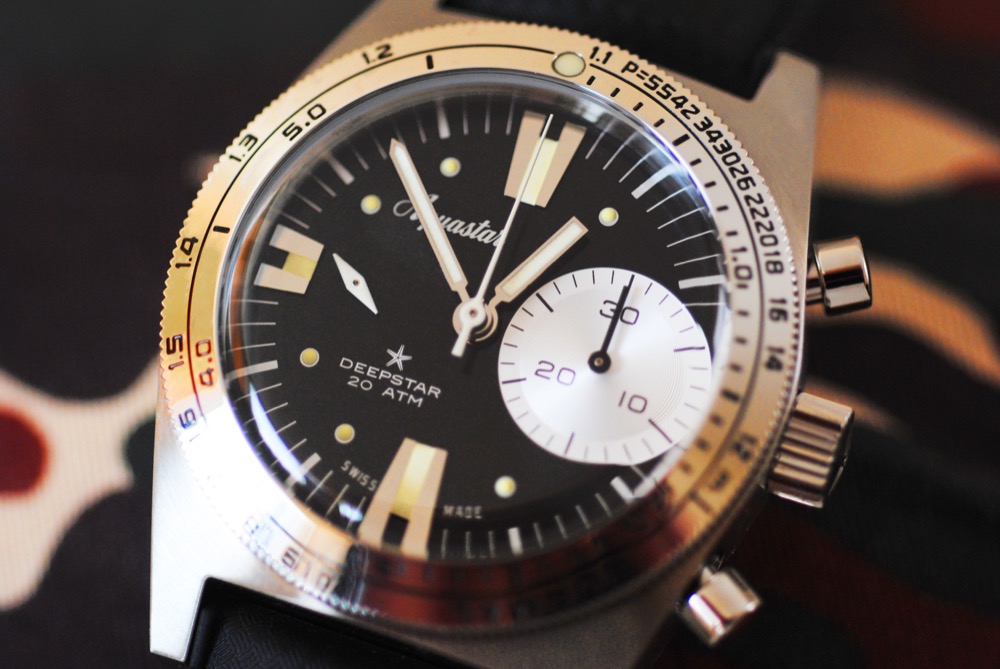 The 60’s watch since then has been exhaustively researched and rest they say is history but in 2020 the Deepstar adventure was rebooted by the Synchron Group and a few weeks ago I asked Rick Marei from Synchron if I could take a look at their latest watch, the Deeptar 2020. 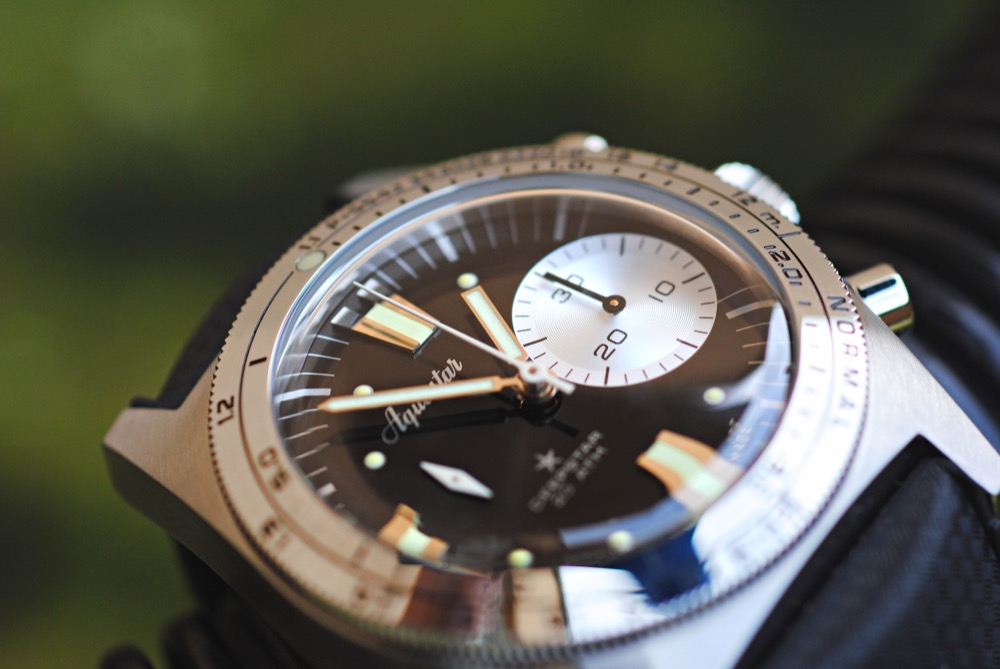 The beautiful markers and block hands ‘jump out’ at you.

I’ve owned 5 or 6 of the original vintage models that went into my book but I am glad to say the ‘Re-Born’ version arrived at my place a while ago and I’ve had time to wear it and jot down a few thoughts about this special watch. The original was available in black, grey and blue and the 2020 offers all of those including now in green with that beautiful two tone spiral dial finiah. I don't want to make a comparison between them, because this model was struck in 2020 which is a long way from the 1960’s, and it quite rightly benefits from the technology that has come along since the original was swimming the Mediterranean on the wrist of the intrepid pioneers of the Sub Aqua world.

I’d like to address the points that the vintage lovers seemed to have jumped on early in it’s release…. the watch is taller, wider and heavier than the original.

Well it has an auto movement, which is a more modern feature, but it isn’t a new feature, just one we have come to expect to find in a modern day watch. This means you start with a watch movement that tells the time, two plates with gears in between that synch together to set and display 12 hours. On top of that, there is a chronograph module… this is another movement of sorts but essentially a stop-watch that acts independently of the ’time telling’ movement. Then on top of that there is a rotor, which is a weight that spins and oscillates with movement and transfers the energy from these movements to the main spring to power the watch, a rotor weight that did not exist on the vintage manual wind valjoux 23. 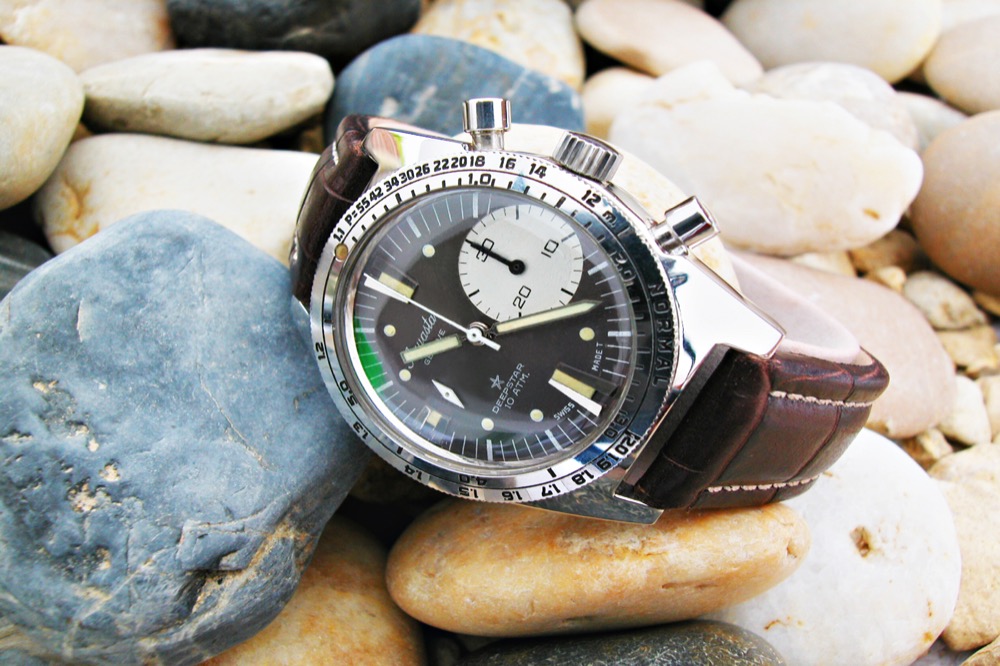 A bigger movement means a taller watch with a domed sapphire crystal, which is an, advancement from the original plexi glass and is also heavier. Then you have the engraved steel bezel and finally the case, which is a no nonsense design and is also bigger. So an adherence to the original design, “which I so applaud”, but with a more modern, practical movement that has made it quite a brilliant and stand alone re issue with the equitable style and design of the original but definitely with it’s own identity. 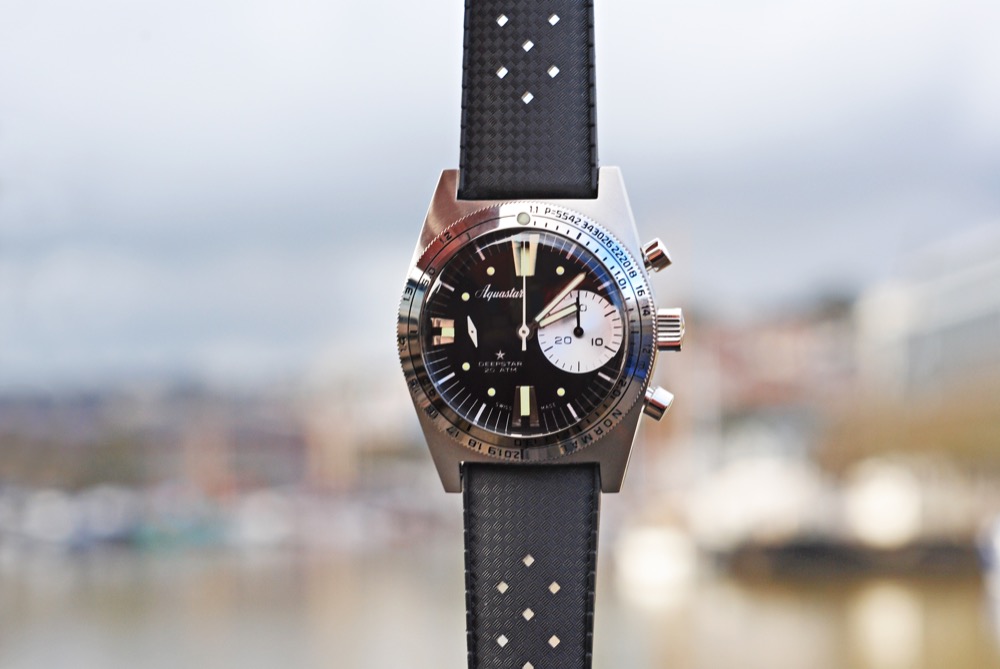 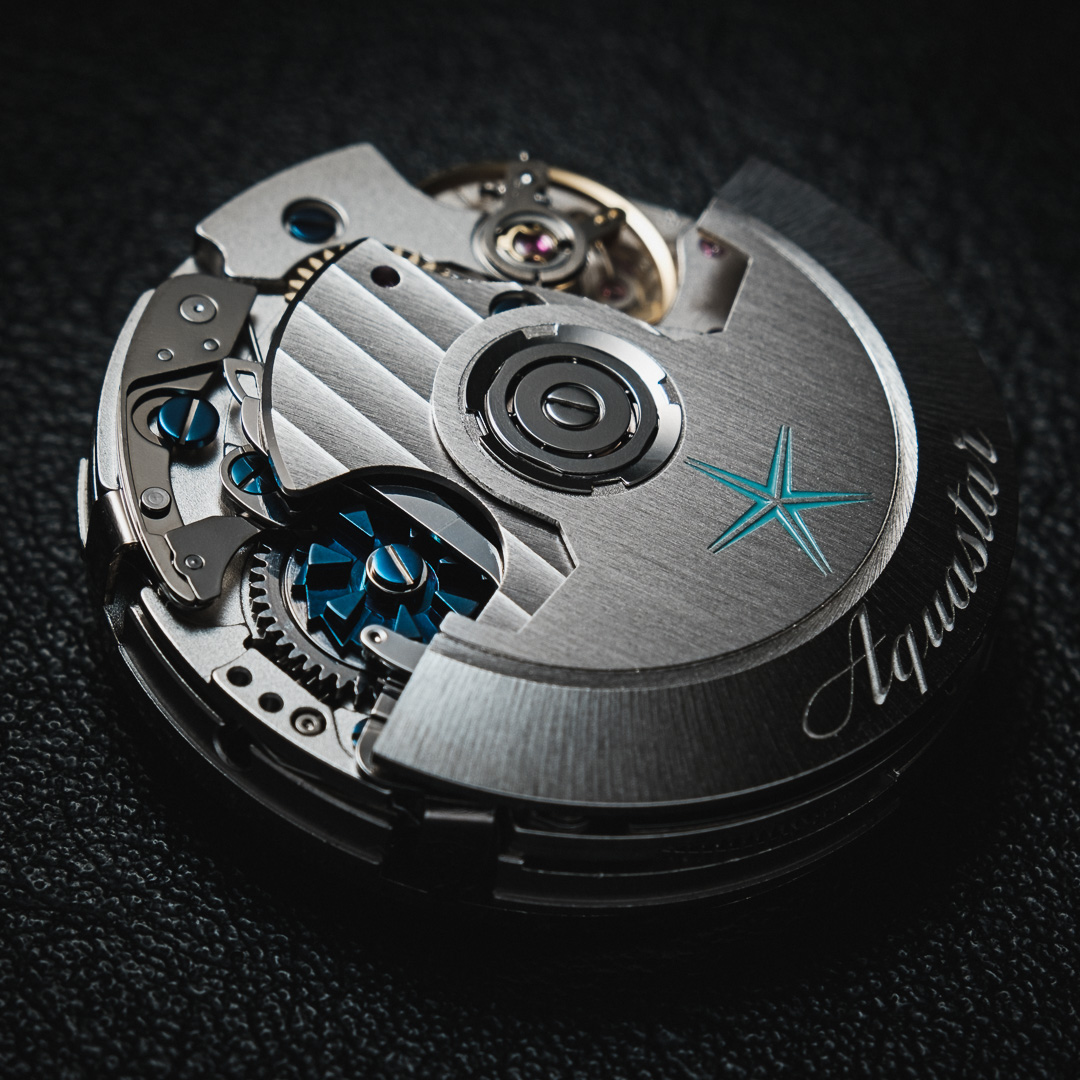 A column wheel has the exact same function, but is built in a way to provide more accurate, more precise operation, which can be noticed through the motion of the crisp and precise pusher action. Where the cam is made of two layers of metal, the column wheel is a single piece, and usually needs high precision machining to manufacture. 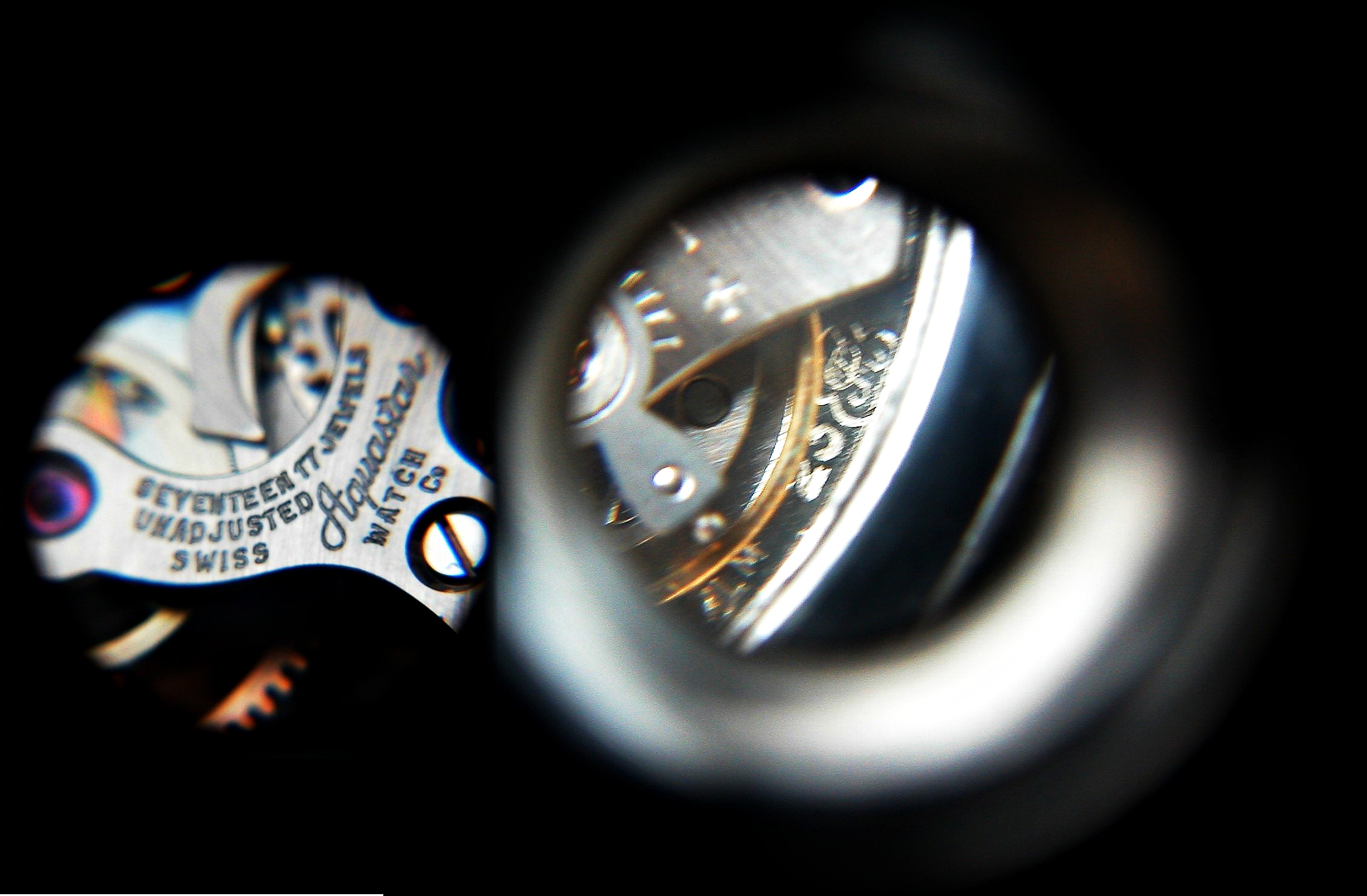 Beyond the precise feel, a column wheel provides more benefit. It is commonly known that cam-actuated chronographs experience slack when started, this is usually noticed when the chronograph seconds hand skips forward, but this is thought to be more of an issue with the use of horizontal versus vertical clutches (where the chronograph’s mechanism meshes horizontally rather than vertically with the gear train), with the more common cam-actuated chronograph typically featuring a horizontal clutch and the column wheel variety, a vertical one. 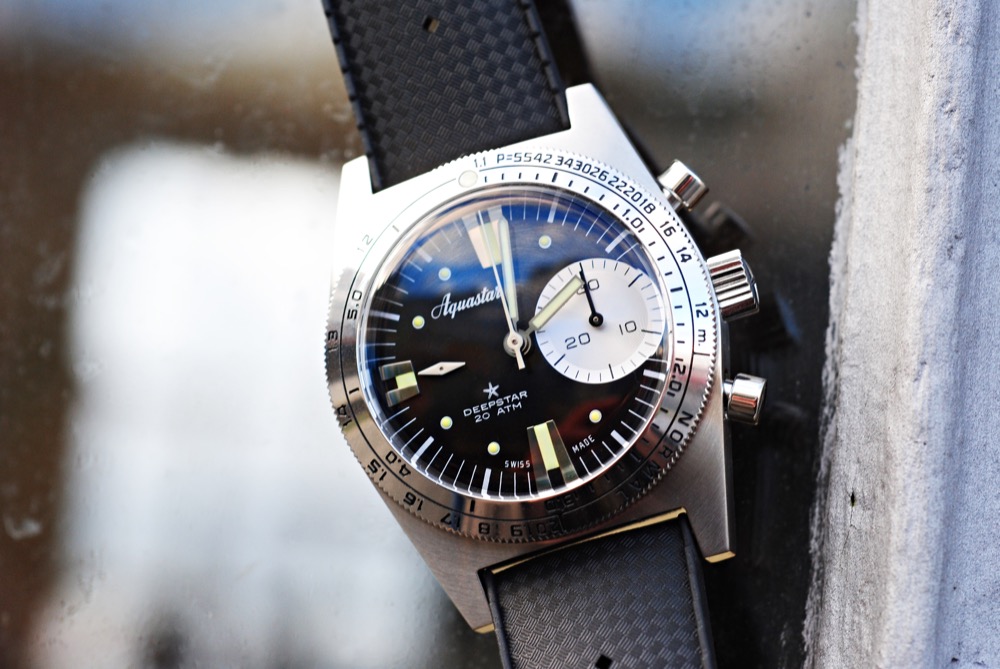 The 2020 Aquastar Deepstar is powered by the LJP mono-compax Chronograph movement, the movement relies on the above described column wheel to operate its chronograph pushers. The movement is adjusted in 5 positions and is accompanied by a certificate. The movement is a La Joux-Perret column wheel high quality modern auto version of the original with a 55h power reserve with blued screws and a Cotes du Genevé scored finish and is as technical as I want to get about the movements because this watch is about style!!! 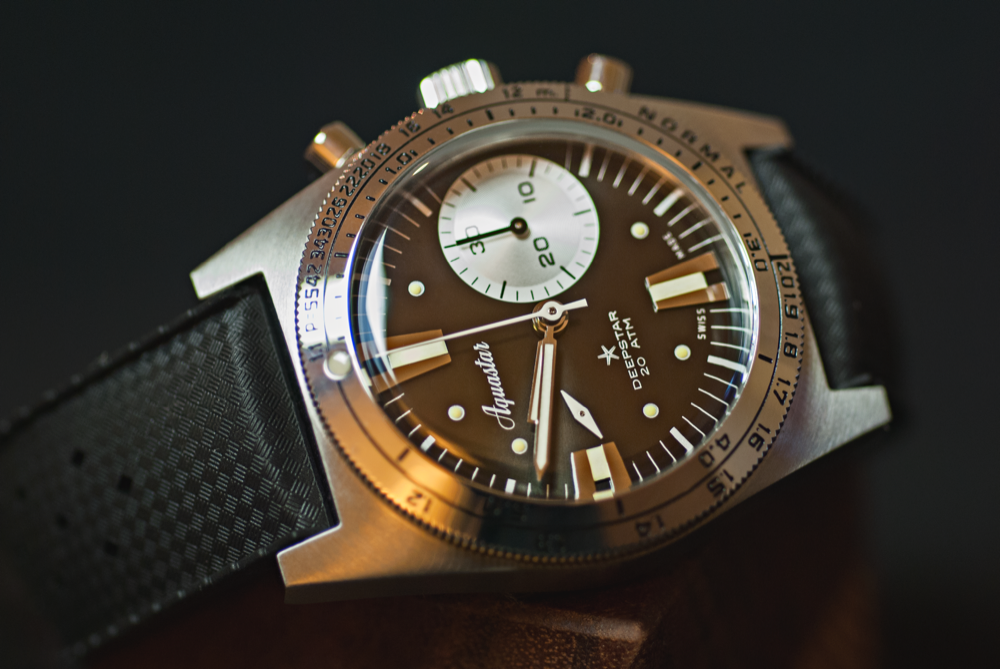 The dial of this new incarnation follows the combined styling of the earlier Deepstar and Aquastar 60 with it’s large luminous plots and the later Aquastar 63 with it’s tuning fork styled 12,6 & 9 markers. In fact it is exactly the same as the originals in every way, which I think are the main design elements that draw the eye to this extraordinary watch. These markers are surely homage to the Art Deco movement of the 1930’s which themselves were influenced by, the ‘Vienna Secession’ group of artists including Gustav Klimt and whose aim was ‘Total Art’. Unifying painting, architecture, and the decorative arts at the later part of the 19th Century combined in this case with industrial design. 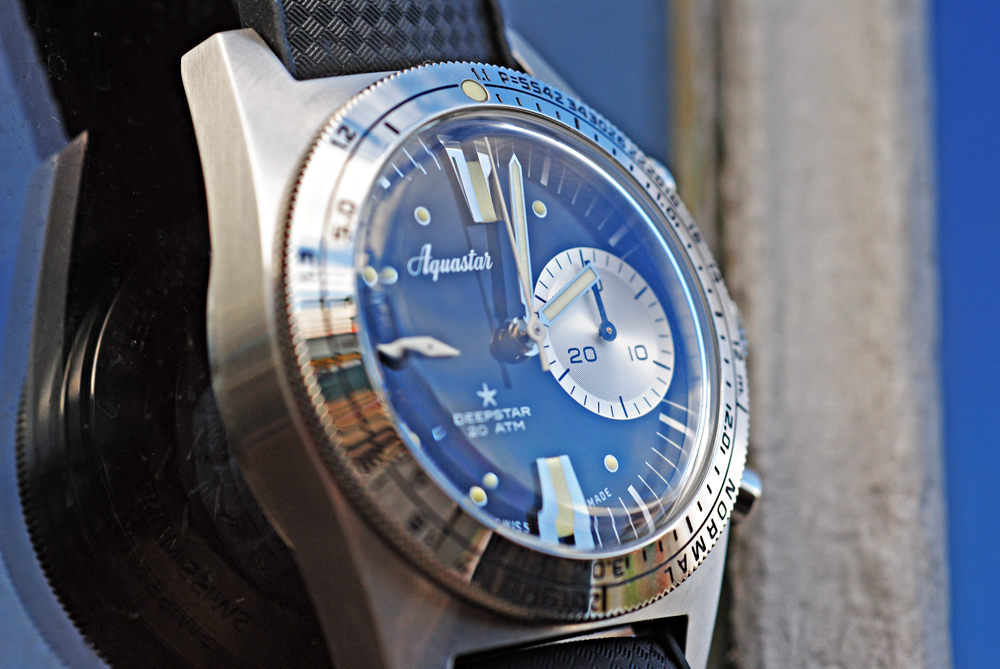 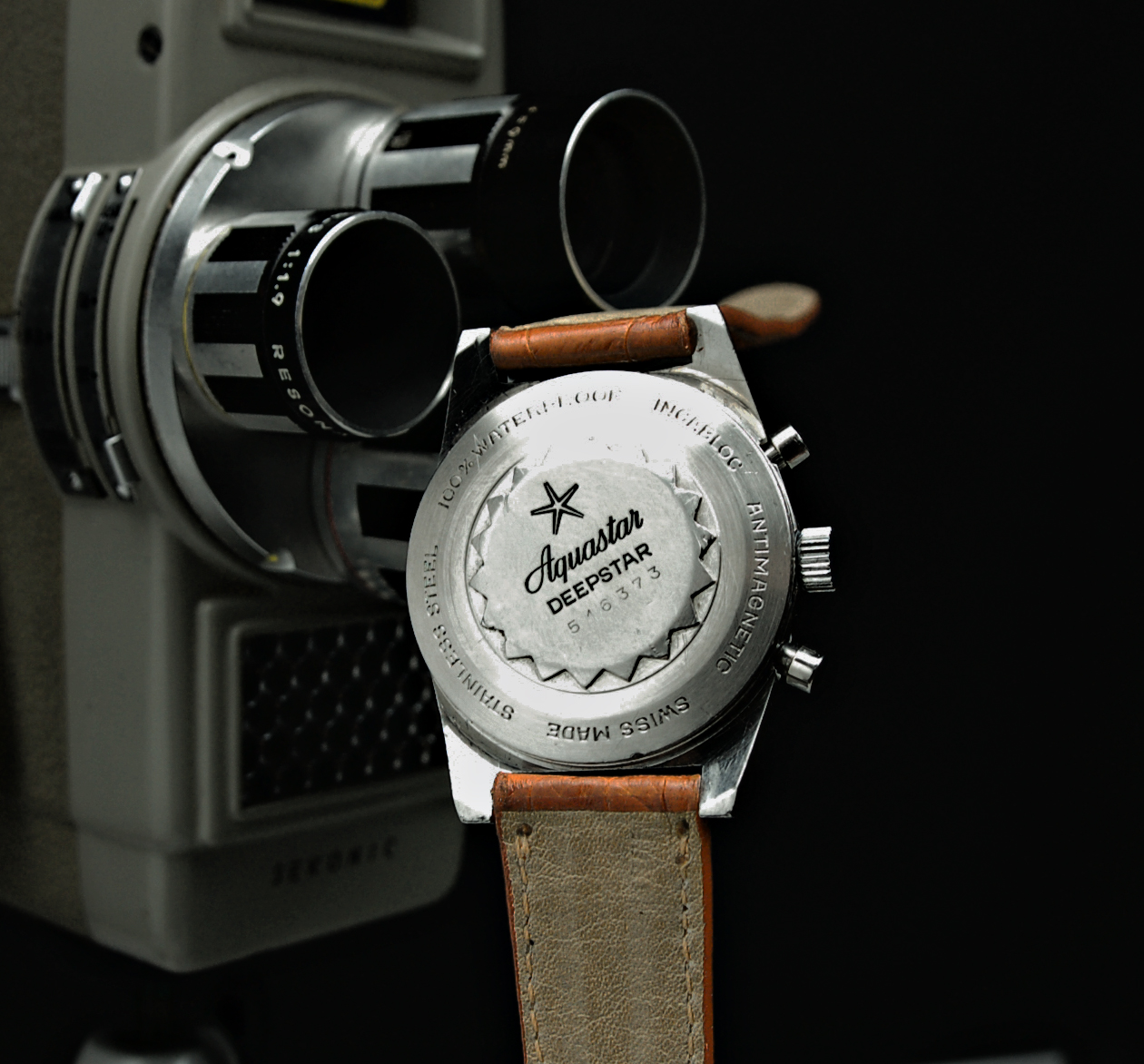 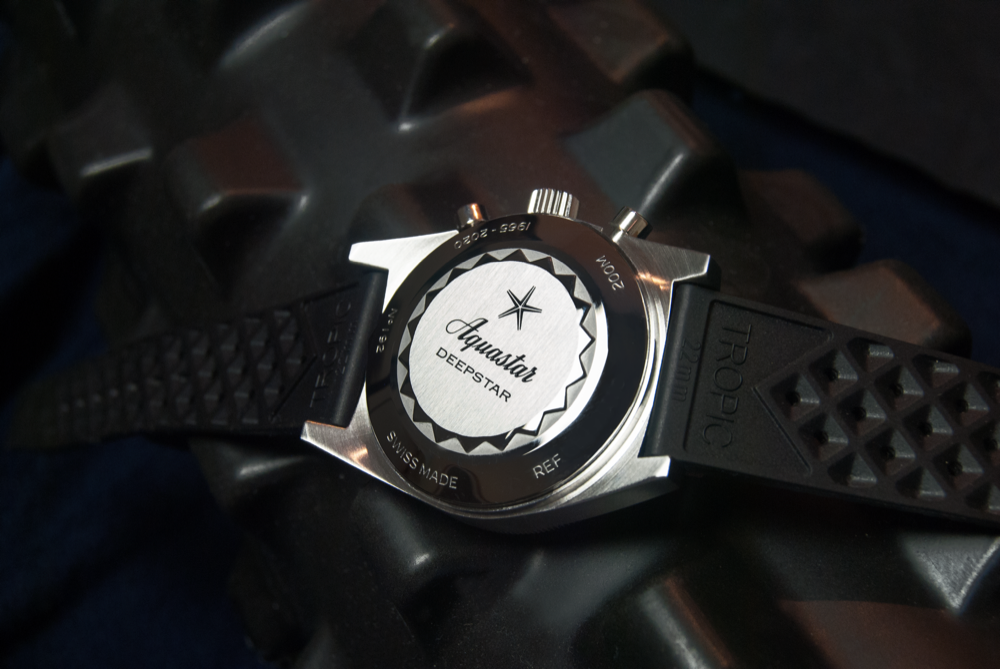 
What most seem to focus on regarding this watch is its diving heritage and the nature of the design in terms of the practical use of it’s dive ratio table, engraved bezel and the large 30 min recording register. But for me, like with the Klimt design link, I think of this watch as a piece of art, a tool watch that has been elevated to something more than the sum of its parts. Decorated Egyptian style markers on the dial and yet practical easy read block hands like the specification of the military watches of WWII. 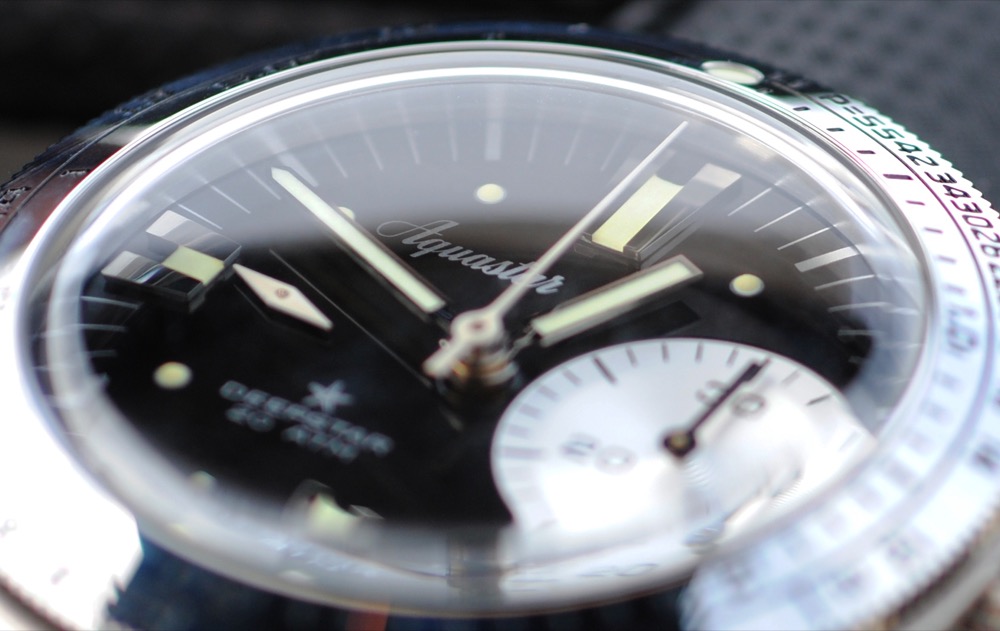 The two tone central scoring of the Deepstar 2020 dial. 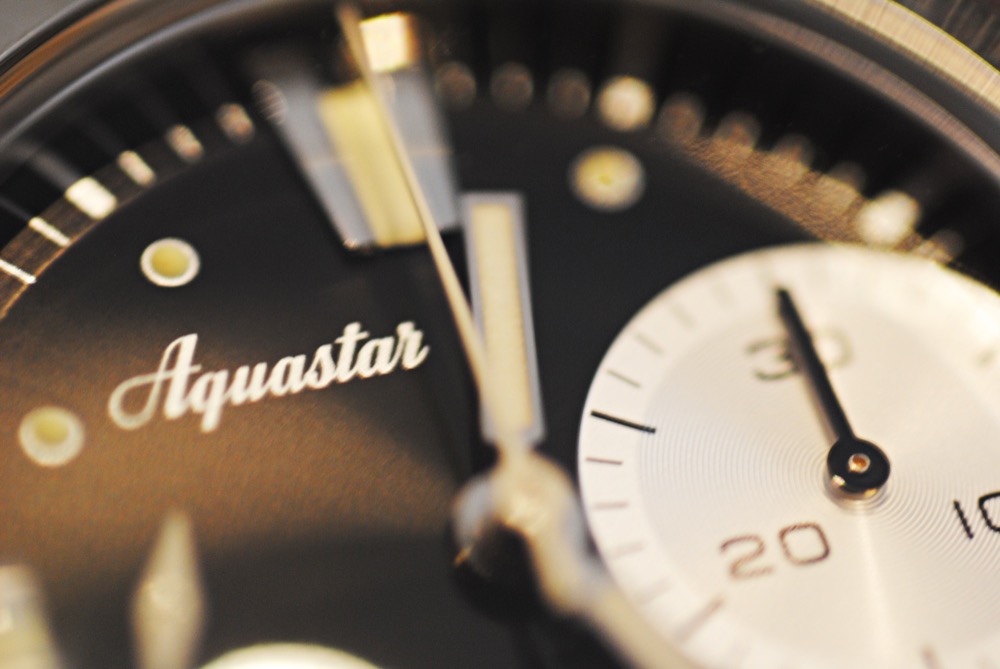 The dial needs to be in contrast to the hands and recorder so that underwater, the hands would visually pop and yet out of the water the two tone central scoring makes the dial decorative and appealing. The large recorder concentrates on the practical side of the watch’s purpose and yet the running seconds, was not wasted either but was turned into a slowly spinning diamond which is another decorative touch that keeps me smiling. The Deepstar 2020 is a fabulous modern day version of the original watch with almost perfect accuracy, which to that end could only be executed by people who really understand and respect these watches and their historical design process, frankly it is perfect!!
Amazon Book Link https://www.amazon.co.uk/Chasing-Time-A ... oks&sr=1-1
#chasingtimebook
info@atgvintagewatches.com
http://www.atgvintagewatches.com
Official Dealer
Bremont
Top

my pleasure.... in the article I surmised that the name of the Deepstar came from the Westinghouse Submersible project that Cousteau was working on and when I had a chat with Aquastar they confirmed that it was that connection that created the original name..... cool hey?
Amazon Book Link https://www.amazon.co.uk/Chasing-Time-A ... oks&sr=1-1
#chasingtimebook
info@atgvintagewatches.com
http://www.atgvintagewatches.com
Official Dealer
Bremont
Top
Post Reply
5 posts • Page 1 of 1

Users browsing this forum: No registered users and 8 guests