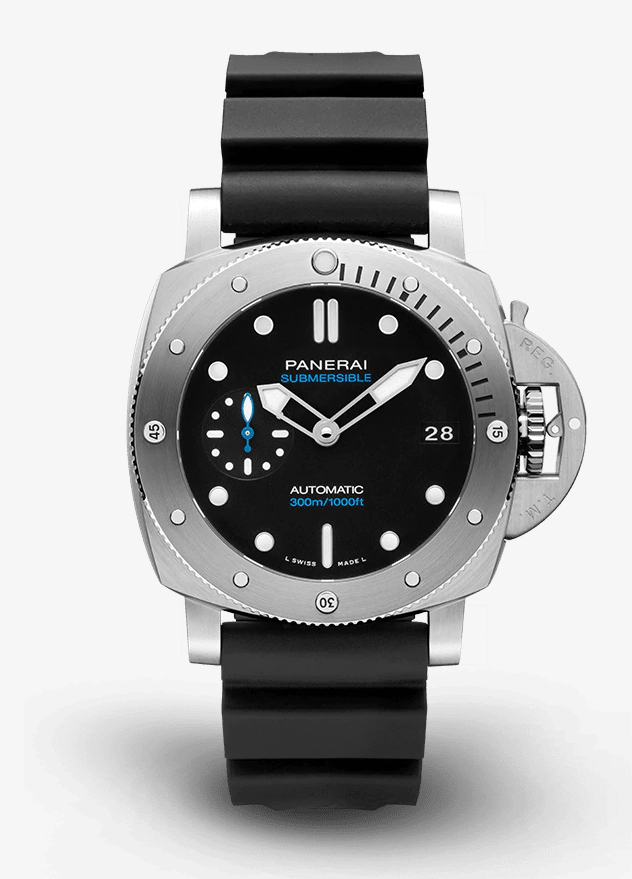 Now with blue text, a different movement, and apparently thinner. I copied this post from WUS:

"Several months ago, I wrote a post inquiring about the movement change in the new 42MM submersibles. Panerai removed the in house 9010 movement and replaced it with a Valfleurier movement that is modified by Panerai, the OP-XXXIV. The Valfleurier will be shared and modified by the different companies under the Richemont umbrella. Last week I was on vacation in NYC, and hit every watch store and boutique there, lol, but that's another story. In Panerai I was able to try on the 973, that's the replacement for the 682. They also had the 683, same watch with ceramic bezel, as well as the 959, again same case but with a grey dial and blue bezel. (Extremely sorry, did not take pics) All the watches looked and felt great, favorite was the 683. I really liked the ceramic bezel on the watch. I asked the sales person about the movement change to see if there was anything to justify it along with the price increase. She didn't seem sure except to say that Panerai was going to be using a lot of the Valfleurier movements. So I finally contacted Panerai, and amazingly, got to speak with someone knowledgeable. It was explained to me that the OP-XXXIV movement was thinner than the 9010 and it allowed Panerai to change the case size of the new watches. The case thickness of the outgoing 682 was 14.37MM, the 973, 959, and 683 are all 13.22MM. I was also informed that OP-XXXIV will be easier and less expensive to service, although, that remains to he seen. It was just nice to see that Panerai did change the case and not just drop in the new movement into the existing case. I still find the price increase a bit much, but the watches were fantastic. If anyone else has any further information, it would be appreciated."
Top

Does anyone know anything about this base movement? I’ve never heard of it.
Top

Users browsing this forum: No registered users and 5 guests