Last week, I reviewed the Omega Seamaster Diver 300M Ceramic & Titanium, an excellent high-end tool watch. One commenter opined that perhaps the model shouldn't really be considered a tool watch because it cost $8,100, and it was unlikely many people, if any, would actually treat it as such.

While their model numbers may not jump out of the screen at you, their colloquial fan-made names might. These are two of the most popular dive watches ever made, the Turtle on the left and the Samurai on the right. These, however, are special versions that Seiko has produced in association with the Ocean Learning Center, a charity founded by Jacques-Yves Cousteau's grandson, Fabien Cousteau, to promote ocean conservation. Consequently, these two watches, and a few others, are called the "Save the Ocean" watches.

But the Save the Ocean Seikos boast more than noble goals. Each model comes with an extremely impressive dial inspired by the deep waters of the ocean. The gradient you see, from a vibrant blue all the way to a deep black is not a trick of lighting or the camera, but rather, the design of the watch, and it does an amazingly good job at replicating the subject matter. Seiko has always been known for its superb dials, but this is usually in the context of Grand Seiko or Credor. Prospex is known for being brutish and nearly invincible, not beautiful.

And yet, here we are, with two of the best looking dials available on a dive watch today. What my photos, or any photos, can't convey, however, is just how dynamic they are, almost to GS-levels. What you see above is how they look in direct lighting, but move them around in different environments and the color will shift, from bright blues to almost purple. While it is not a sunburst dial, it has some of the properties of a sunburst, and in the right light it appears to almost glow. The 3-dimensional character of the dial, with deep engraved lines, is very impressive as well.

One of the most obvious differences between these watches is that the Turtle has a day-date complication whereas the Samurai only has the date complication. I've never personally found much of a need for a day-date, but as any Seiko fan already knows, this is a fairly interesting version of the complication. Here you have access to two languages for the day, in this case you can also choose Spanish, which is a neat touch. The day also changes color, with blue for Saturday and red for Sunday, so you actually get different colored accents as the week progresses.

Although these two watches have basically the same dial, they're different in many other ways, like their bezel designs. The Samurai's bezel is far bolder, with sharp, distinct lines throughout, mirroring its other highly-angular styling cues. The Turtle, being the more rotund of the pair, gets dots instead of lines and has a more laid-back appearance. Whichever you get, they both feel the same, featuring Seiko's characteristic smooth, medium-resistance feel.

The hands are completely different as well, particularly the seconds hand, as the SRPD11 Turtle adopts a lollipop style while the SRPD09 Samurai keeps a relatively conventional hand, albeit with lume in the middle instead of on the tip.

It's easier to compare the differences between the hour markers and hands in the dark. Both photos were taken with exactly the same settings, so we can pretty safely say that there is no meaningful difference in brightness between the two watches, although the Samurai does keep a tiny luminescent marker at 3:00 where the Turtle lacks one, presumably to create space for its day-date complication. In either case, the lume is superb, and you can see that Prospex, like the Omega I recently reviewed, followed best practices in designing the watches. Due to the different shape and colors of the minute and hour hands, it's virtually impossible to confuse them, even at a glance. Furthermore, a distinctive 12:00 marker makes orienting the watch very easy.

Far more different than the hands are the cases. The SRPD11 case, for which it received the name Turtle, is extremely smooth and rounded, while the SRPD09 is completely the opposite, composed almost entirely of sharp angles. The Turtle is also slightly larger at 45mm, compared to the Samurai's 44mm. They're both about 13mm thick, though, which is quite reasonable for watches in this genre these days. Both, of course, feature black cases, or more precisely, what Seiko calls a "gray ion" finish. Unlike many black cases, these remain very shiny and metallic and are somewhere between black and a dark gray, depending on lighting.

Here you can see just how different the design of these cases is. The Turtle has smooth, flowing lines, reminiscent a turtle shell, while the Samurai has very sharp edges, as well as an unusual shape that gives you the impression the watch is somehow held in place by the lugs, not unlike the old Ananta.

The crowns are entirely distinct as well. The Turtle features a recessed, and relatively discreet, 4:00 crown, whereas the Samurai uses an unusually long crown at the regular 3:00 position. The Turtle's crown has a coin edge, while the Samurai uses knurling. Because the crown is recessed in the Turtle's case, it doesn't have much need for crown guards, but this is entirely the opposite with the Samurai's long crown. The Samurai's crown is also easier to unscrew and wind because there's so much to grip there. Both, of course, screw down.

The SRPD09, shown here, is powered by the 4R35 while the SRPD11 is powered by the 4R36, the difference being that one has a date complication and the other has a day-date complication. Both of these movements are successors to the legendarily tough 7S26, the mainstay of affordable Seikos for years. This next-generation of movements is a big upgrade and includes features that we now take for granted, like hacking (stopping the seconds hand) and hand-winding. Chronometers these are not, but they are about as proven as an automatic movement can get at this point, so they are a great fit in an affordable watch that's going to get banged around.

So if you think spending $8,100 on a tool watch like the Seamaster Diver 300M Ceramic & Titanium is absurd, then you're in luck. You can get a black-case, wave-pattern dial tool watch with an in-house movement for about 7% of the price. That's not a typo, you could basically buy 7 of each before you got to the price of that Omega. While I encourage people never to buy on price or value alone, as they may end up saving money on a watch they don't really want in the first place, there is the practical reality that most of us just aren't going to use something like that Seamaster the way it was intended. We might, however, with a watch like these Prospexes.

I usually have something more to complain about when I review watches, but I'm not sure what to dislike about these, given their price point. I guess I can complain that Seiko USA's pages on these watches are slightly misleading, insofar as I think they photographed prototypes. As you can see in my photo, the back is is polished steel, not black-coated, unlike in Seiko's official images.

Whichever you choose, you'll get quite an interesting package. Not only are these great looking divers in the general sense, but they have remarkably interesting and refined dials too, something that is not commonly seen in this genre of watches, particularly at this price point. I love them, particularly the SRPD11, and they're probably my favorite overall Prospexes right now.

Great review. The only thing I had to complain about with the Samurai was the strap. It’s very comfortable, surprisingly so, but I didn’t like the style. A ToxicNATO fixed that. 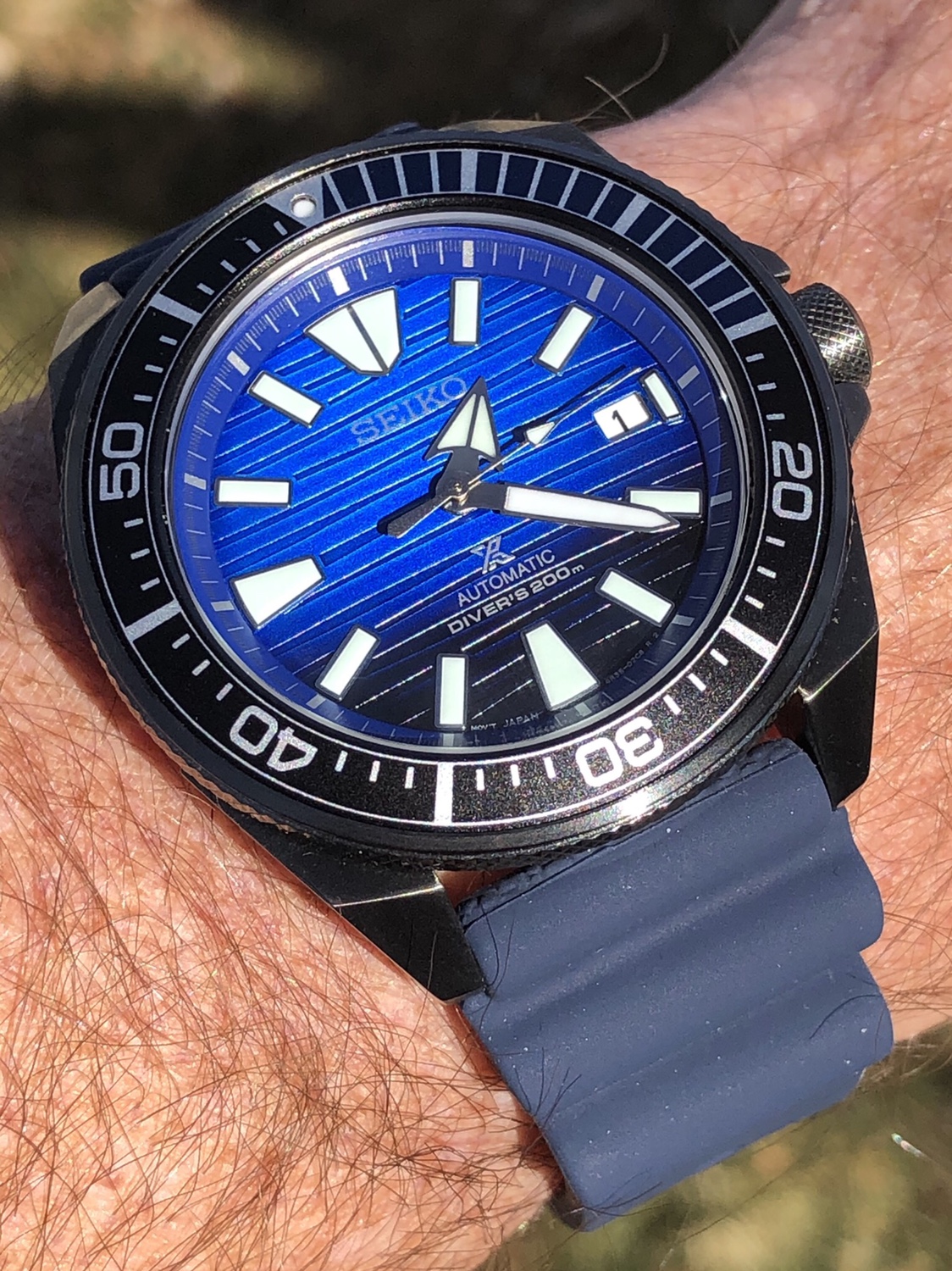 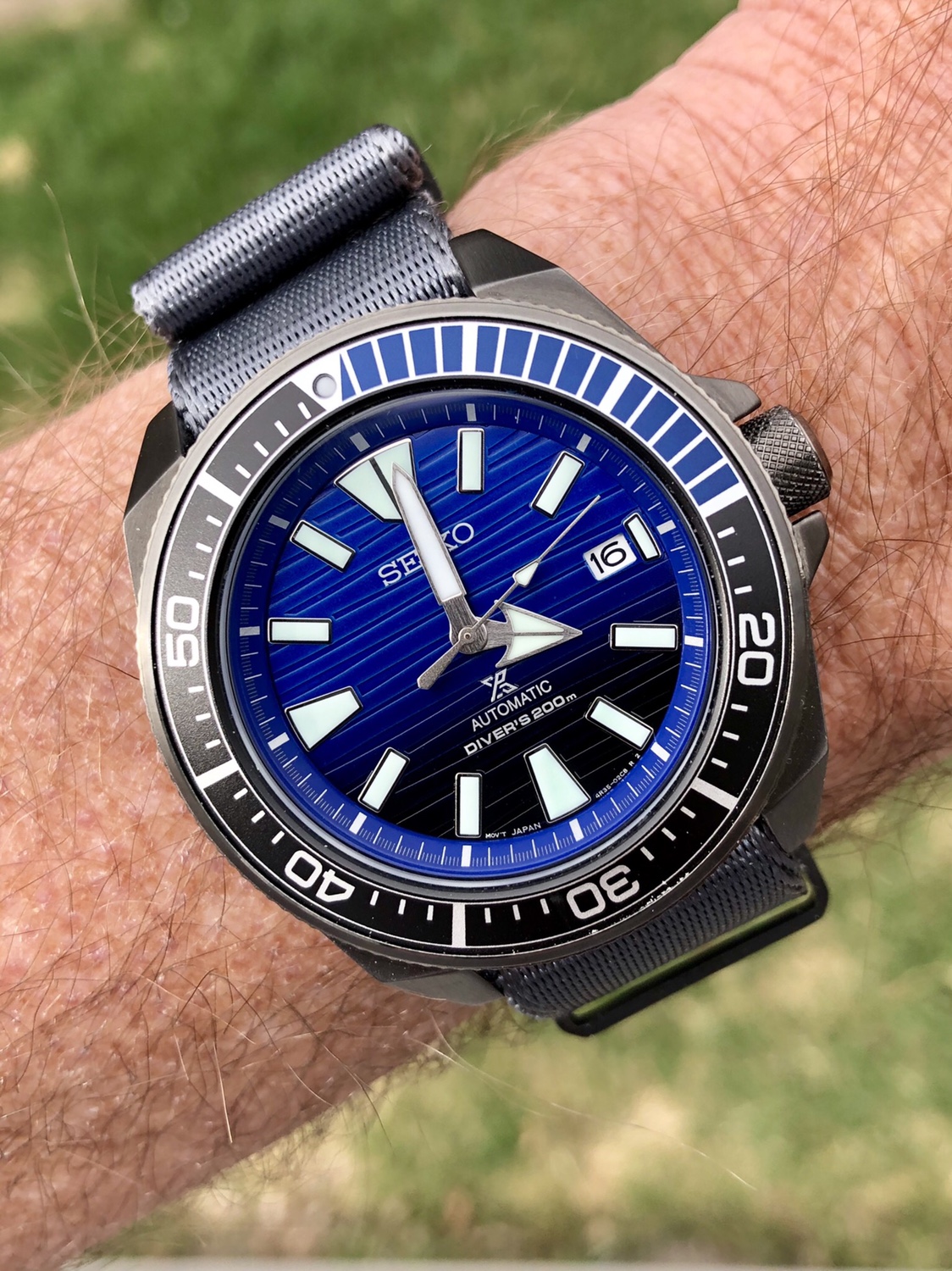 STO is nice, but the PADI NAFT is nicer IMO. Would love a black case PADI.
Top

That’s funny. The PADI is one of my least favorite Turdles. I hardly ever wear mine.
"It's such a fine line between stupid, and clever."
David St. Hubbins
Top

That’s funny. The PADI is one of my least favorite Turdles. I hardly ever wear mine.

Yeah, well it's not like you have a lot of experience with Turdles

That’s funny. The PADI is one of my least favorite Turdles. I hardly ever wear mine.

You have a few others that are decent. 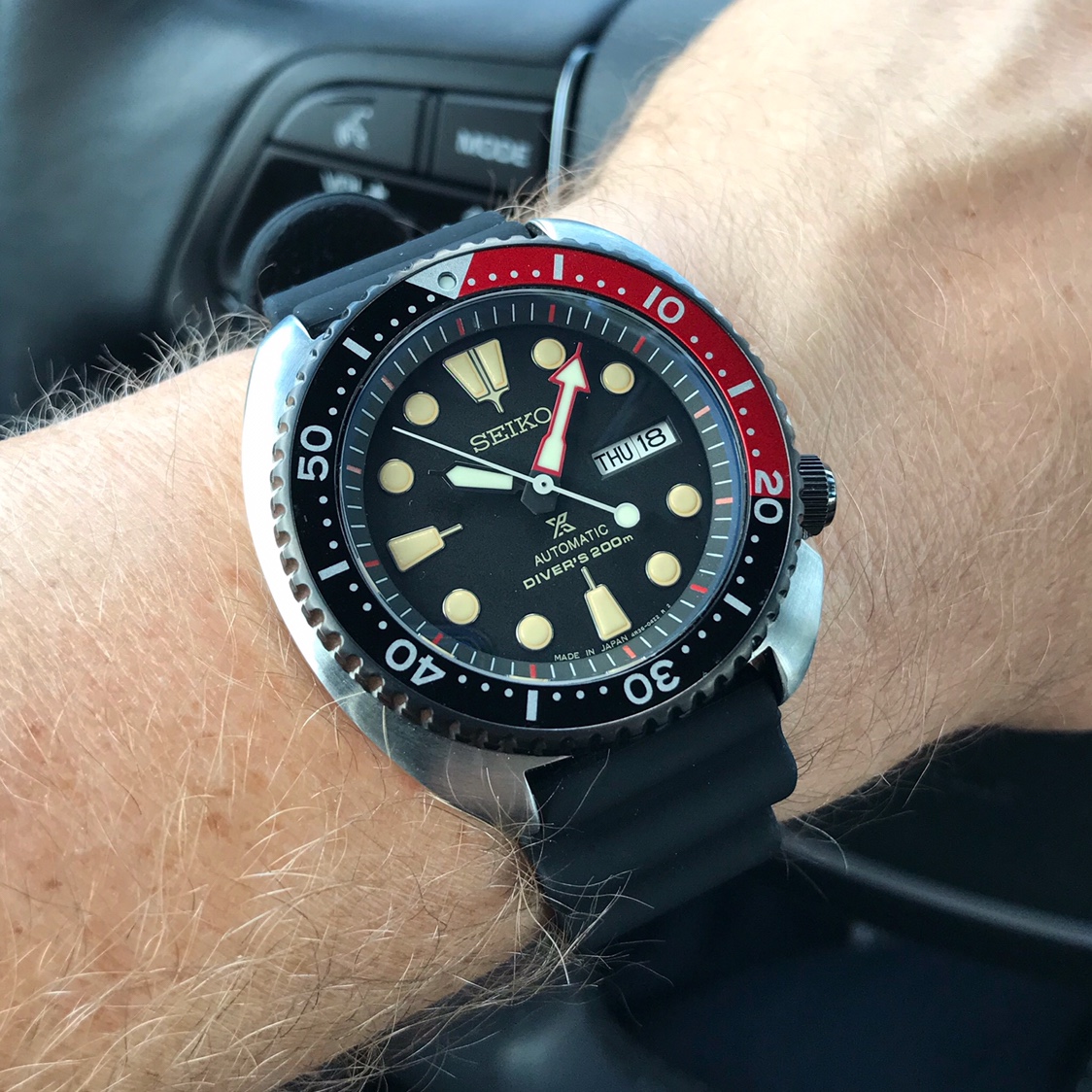 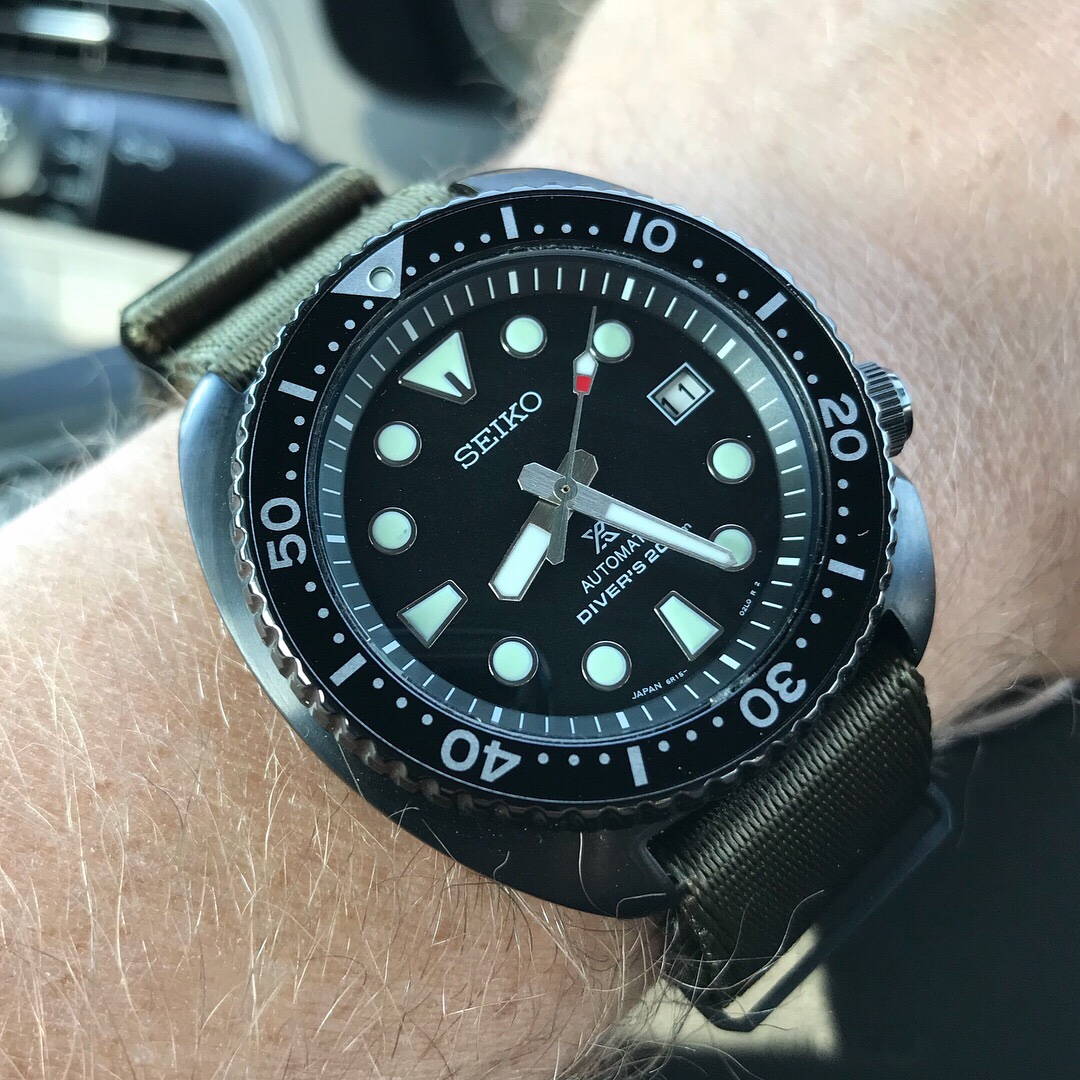 It is the perfect watch for me, most of the time. They look great and it isn’t a big deal if they take a little abuse at work.
"It's such a fine line between stupid, and clever."
David St. Hubbins
Top

Actually I don't believe any of these new Turdles are an improvement on the originals. These are just perfect. 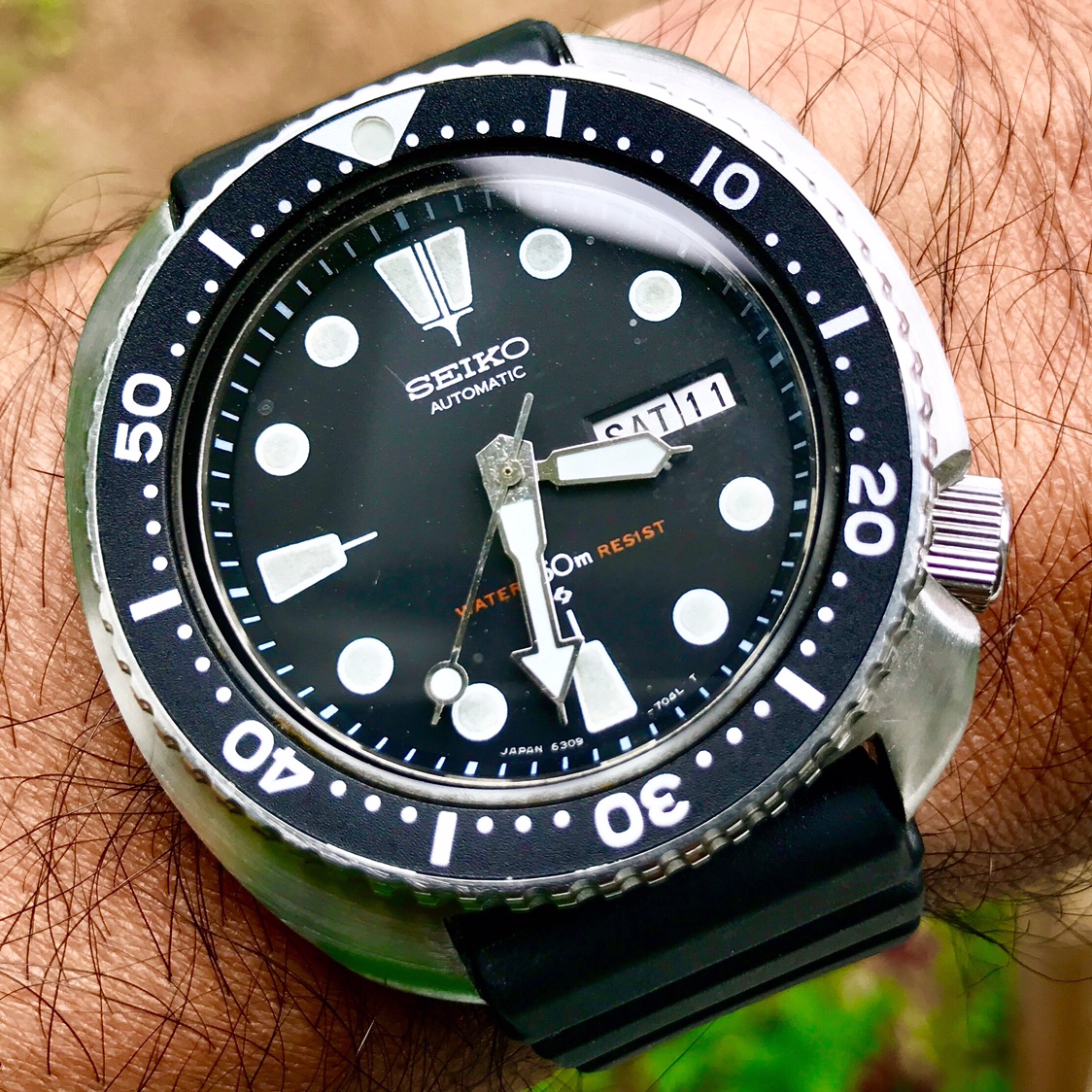 Thanks for the usual excellent review.


These aren’t for me as I usually dislike black shiny watches, but I should really add a PADI naft

The PADI is very cool, but I'd take a STO any day. The dial is killer. I might choose the non-coated case version though.
Top

I think Seiko makes one of the best dive watches on the market. Its really hard to compete with modern dive computers, but still...im using it as a backup instrument to measure the time underwater.

Besides, I've made a small comparison page https://vstwtch.co/guide/best-dive-watc ... -1000.html that should help to understand which dive watch may be the best for you. Don't hesitate to contact in case of any questions!

love my "std" STO and am so glad the hands are the same lume color. that shit drives me nuts

vakkup wrote: ↑
Sun Jun 07, 2020 3:13 am
I think Seiko makes one of the best dive watches on the market. Its really hard to compete with modern dive computers, but still...im using it as a backup instrument to measure the time underwater.

Besides, I've made a small comparison page https://vstwtch.co/guide/best-dive-watc ... -1000.html that should help to understand which dive watch may be the best for you. Don't hesitate to contact in case of any questions!

Users browsing this forum: No registered users and 8 guests